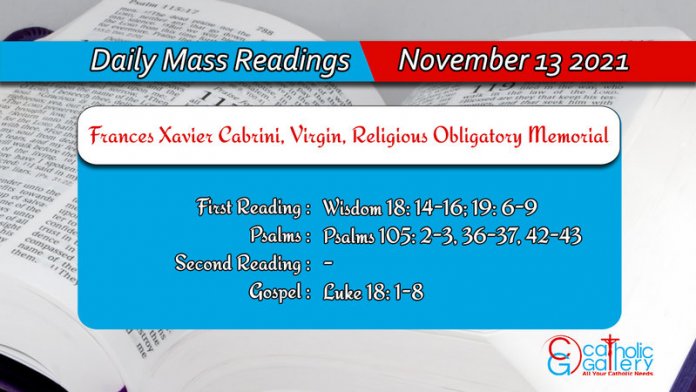 14 For while all things were in quiet silence, and the night was in the midst of her course,

15 Thy almighty word leapt down from heaven from thy royal throne, as a fierce conqueror into the midst of the land of destruction.

16 With a sharp sword carrying thy unfeigned commandment, and he stood and filled all things with death, and standing on the earth reached even to heaven.

19:6 For every creature according to its kind was fashioned again as from the beginning, obeying thy commandments, that thy children might be kept without hurt.

7 For a cloud overshadowed their camp, and where water was before, dry land appeared, and in the Red Sea a way without hinderance, and out of the great deep a springing field:

8 Through which all the nation passed which was protected with thy hand, seeing thy miracles and wonders.

9 For they fed on their food like horses, and they skipped like lambs, praising thee, O Lord, who hadst delivered them.

36 And he slew all the firstborn in their land: the firstfruits of all their labour.

37 And he brought them out with silver and gold: and there was not among their tribes one that was feeble.

42 Because he remembered his holy word, which he had spoken to his servant Abraham.

43 And he brought forth his people with joy, and his chosen with gladness.

1 And he spoke also a parable to them, that we ought always to pray, and not to faint,

2 Saying: There was a judge in a certain city, who feared not God, nor regarded man.

3 And there was a certain widow in that city, and she came to him, saying: Avenge me of my adversary.

4 And he would not for a long time. But afterwards he said within himself: Although I fear not God, nor regard man,

5 Yet because this widow is troublesome to me, I will avenge her, lest continually coming she weary me.

6 And the Lord said: Hear what the unjust judge saith.

7 And will not God revenge his elect who cry to him day and night: and will he have patience in their regard?

8 I say to you, that he will quickly revenge them. But yet the Son of man, when he cometh, shall he find, think you, faith on earth?

The readings on this page are taken from the Douay-Rheims Catholic Bible. You can also read the Mass Readings taken from the New Jerusalem Bible, which is used at Mass in most of the English-speaking world. (References, Copyrights).
◄ November – 12 November – 14 ►
By Pradeep Augustine
Print
Facebook
WhatsApp
Twitter
Pinterest
Linkedin
Email
Telegram
LINE
Viber