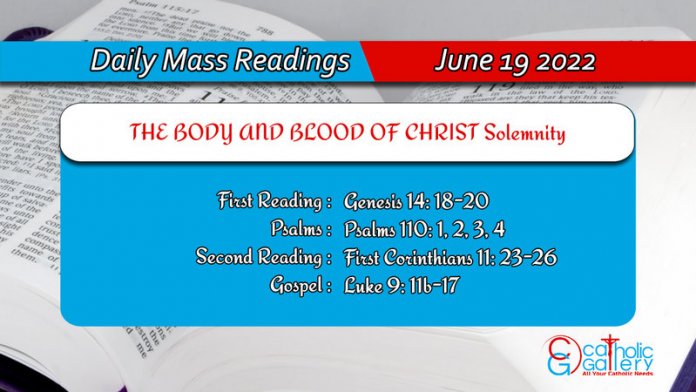 THE BODY AND BLOOD OF CHRIST Solemnity

18 But Melchisedech the king of Salem, bringing forth bread and wine, for he was the priest of the most high God,

19 Blessed him, and said: Blessed be Abram by the most high God, who created heaven and earth.

20 And blessed be the most high God, by whose protection the enemies are in thy hands. And he gave him the tithes of all.

1 The Lord said to my Lord: Sit thou at my right hand: Until I make thy enemies thy footstool.

2 The Lord will send forth the sceptre of thy power out of Sion: rule thou in the midst of thy enemies.

3 With thee is the principality in the day of thy strength: in the brightness of the saints: from the womb before the day star I begot thee.

4 The Lord hath sworn, and he will not repent: Thou art a priest for ever according to the order of Melchisedech.

23 For I have received of the Lord that which also I delivered unto you, that the Lord Jesus, the same night in which he was betrayed, took bread.

24 And giving thanks, broke, and said: Take ye, and eat: this is my body, which shall be delivered for you: this do for the commemoration of me.

25 In like manner also the chalice, after he had supped, saying: This chalice is the new testament in my blood: this do ye, as often as you shall drink, for the commemoration of me.

26 For as often as you shall eat this bread, and drink the chalice, you shall shew the death of the Lord, until he come.

11 Which when the people knew, they followed him; and he received them, and spoke to them of the kingdom of God, and healed them who had need of healing.

12 Now the day began to decline. And the twelve came and said to him: Send away the multitude, that going into the towns and villages round about, they may lodge and get victuals; for we are here in a desert place.

13 But he said to them: Give you them to eat. And they said: We have no more than five loaves and two fishes; unless perhaps we should go and buy food for all this multitude.

14 Now there were about five thousand men. And he said to his disciples: Make them sit down by fifties in a company.

15 And they did so; and made them all sit down.

16 And taking the five loaves and the two fishes, he looked up to heaven, and blessed them; and he broke, and distributed to his disciples, to set before the multitude.

17 And they did all eat, and were filled. And there were taken up of fragments that remained to them, twelve baskets.

The readings on this page are taken from the Douay-Rheims Catholic Bible. You can also read the Mass Readings taken from the New Jerusalem Bible, which is used at Mass in most of the English-speaking world. (References, Copyrights).
◄ June – 18 June – 20 ►
By Pradeep Augustine
Print
Facebook
WhatsApp
Twitter
Pinterest
Linkedin
Email
Telegram
LINE
Viber