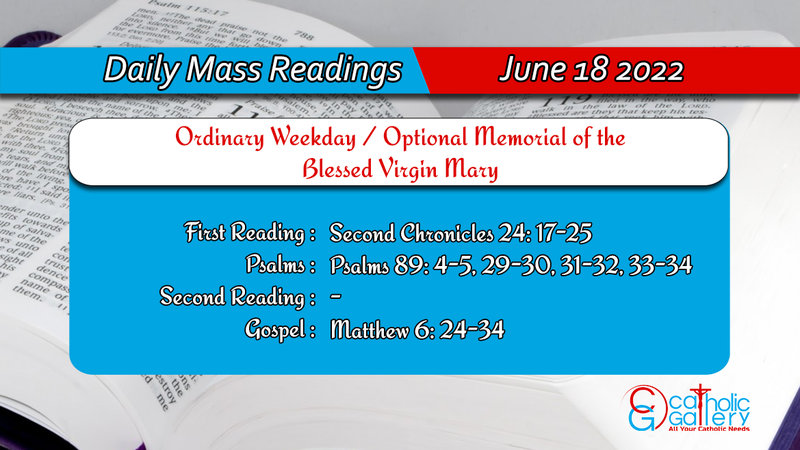 17 And after the death of Joiada, the princes of Juda went in, and worshipped the king: and he was soothed by their services and hearkened to them.

18 And they forsook the temple of the Lord the God of their fathers, and served groves and idols, and wrath came upon Juda and Jerusalem for this sin.

19 And he sent prophets to them to bring them back to the Lord, and they would not give ear when they testified against them.

20 The spirit of God then came upon Zacharias the son of Joiada the priest, and he stood in the sight of the people, and said to them: Thus saith the Lord God: Why transgress you the commandment of the Lord which will not be for your good, and have forsaken the Lord, to make him forsake you?

21 And they gathered themselves together against him, and stoned him at the king’s commandment in the court of the house of the Lord.

22 And king Joas did not remember the kindness that Joiada his father had done to him, but killed his son. And when he died, he said: The Lord see, and require it.

23 And when a year was come about, the army of Syria came up against him: and they came to Juda and Jerusalem, and killed all the princes of the people, and they sent all the spoils to the king of Damascus.

24 And whereas there came a very small number of the Syrians, the Lord delivered into their hands an infinite multitude, because they had forsaken the Lord the God of their fathers: and on Joas they executed shameful judgments.

25 And departing they left him in diseases: and his servants rose up him, for revenge of the blood of the son of Joiada the priest, and they slew him in his bed, and he died: and they buried him in the city of David, but not in the sepulchres of the kings.

4 I have made a covenant with my elect: I have sworn to David my servant:

5 Thy seed will I settle for ever. And I will build up thy throne unto generation and generation.

29 I will keep my mercy for him for ever: and my covenant faithful to him.

30 And I will make his seed to endure for evermore: and his throne as the days of heaven.

31 And if his children forsake my law, and walk not in my judgments:

32 If they profane my justices: and keep not my commandments:

33 I will visit their iniquities with a rod: and their sins with stripes.

34 But my mercy I will not take away from him: nor will I suffer my truth to fail.

24 No man can serve two masters. For either he will hate the one, and love the other: or he will sustain the one, and despise the other. You cannot serve God and mammon.

26 Behold the birds of the air, for they neither sow, nor do they reap, nor gather into barns: and your heavenly Father feedeth them. Are not you of much more value than they?

27 And which of you by taking thought, can add to his stature by one cubit?

28 And for raiment why are you solicitous? Consider the lilies of the field, how they grow: they labour not, neither do they spin.

29 But I say to you, that not even Solomon in all his glory was arrayed as one of these.

30 And if the grass of the field, which is today, and tomorrow is cast into the oven, God doth so clothe: how much more you, O ye of little faith?

31 Be not solicitous therefore, saying, What shall we eat: or what shall we drink, or wherewith shall we be clothed?

33 Seek ye therefore first the kingdom of God, and his justice, and all these things shall be added unto you.

The readings on this page are taken from the Douay-Rheims Catholic Bible. You can also read the Mass Readings taken from the New Jerusalem Bible, which is used at Mass in most of the English-speaking world. (References, Copyrights).
◄ June – 17June – 19 ►
ByPradeep Augustine
Print
Facebook
WhatsApp
Twitter
Pinterest
Linkedin
Email
Telegram
LINE
Viber