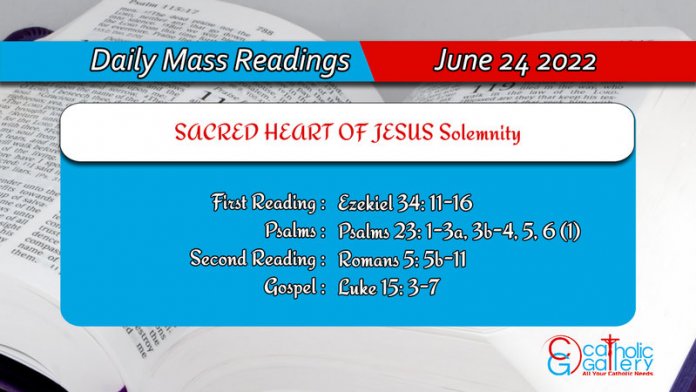 11 For thus saith the Lord God: Behold I myself will seek my sheep, and will visit them.

12 As the shepherd visiteth his flock in the day when he shall be in the midst of his sheep that were scattered, so will I visit my sheep, and will deliver them out of all the places where they have been scattered in the cloudy and dark day.

15 I will feed my sheep: and I will cause them to lie down, saith the Lord God.

5 And hope confoundeth not: because the charity of God is poured forth in our hearts, by the Holy Ghost, who is given to us.

6 For why did Christ, when as yet we were weak, according to the time, die for the ungodly?

7 For scarce for a just man will one die; yet perhaps for a good man some one would dare to die.

8 But God commendeth his charity towards us; because when as yet we were sinners, according to the time,

9 Christ died for us; much more therefore, being now justified by his blood, shall we be saved from wrath through him.

10 For if, when we were enemies, we were reconciled to God by the death of his Son; much more, being reconciled, shall we be saved by his life.

11 And not only so; but also we glory in God, through our Lord Jesus Christ, by whom we have now received reconciliation.

3 And he spoke to them this parable, saying:

4 What man of you that hath an hundred sheep: and if he shall lose one of them, doth he not leave the ninety-nine in the desert, and go after that which was lost, until he find it?

5 And when he hath found it, lay it upon his shoulders, rejoicing:

6 And coming home, call together his friends and neighbours, saying to them: Rejoice with me, because I have found my sheep that was lost?

7 I say to you, that even so there shall be joy in heaven upon one sinner that doth penance, more than upon ninety-nine just who need not penance.

The readings on this page are taken from the Douay-Rheims Catholic Bible. You can also read the Mass Readings taken from the New Jerusalem Bible, which is used at Mass in most of the English-speaking world. (References, Copyrights).
◄ June – 23 June – 25 ►
By Pradeep Augustine
Print
Facebook
WhatsApp
Twitter
Pinterest
Linkedin
Email
Telegram
LINE
Viber