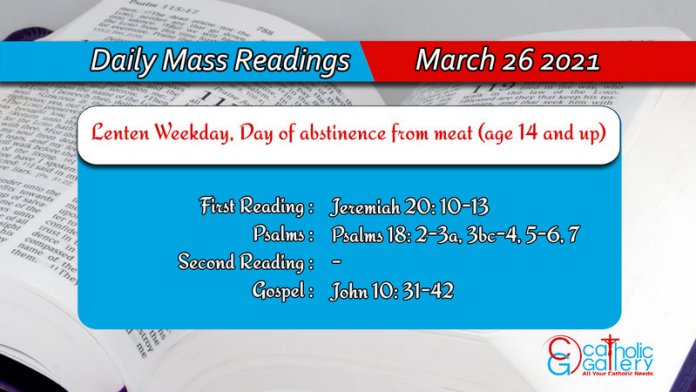 Lenten Weekday, Day of abstinence from meat (age 14 and up)

10 For I heard the reproaches of many, and terror on every side: Persecute him, and let us persecute him: from all the men that were my familiars, and continued at my side: if by any means he may be deceived, and we may prevail against him, and be revenged on him.

11 But the Lord is with me as a strong warrior: therefore they that persecute me shall fall, and shall be weak: they shall be greatly confounded, because they have not understood the everlasting reproach, which never shall be effaced.

12 And thou, O Lord of hosts, prover of the just, who seest the reins and the heart: let me see, I beseech thee, thy vengeance on them: for to thee I have laid open my cause.

13 Sing ye to the Lord, praise the Lord: because he hath delivered the soul of the poor out of the hand of the wicked.

2 I will love thee, O Lord, my strength:

3 The Lord is my firmament, my refuge, and my deliverer. My God is my helper, and in him will I put my trust. My protector and the horn of my salvation, and my support.

4 Praising I will call upon the Lord: and I shall be saved from my enemies.

5 The sorrows of death surrounded me: and the torrents of iniquity troubled me.

6 The sorrows of hell encompassed me: and the snares of death prevented me.

7 In my affliction I called upon the Lord, and I cried to my God: And he heard my voice from his holy temple: and my cry before him came into his ears.

31 The Jews then took up stones to stone him.

32 Jesus answered them: Many good works I have shewed you from my Father; for which of these works do you stone me?

33 The Jews answered him: For a good work we stone thee not, but for blasphemy; and because that thou, being a man, maketh thyself God.

34 Jesus answered them: Is it not written in your law: I said you are gods?

35 If he called them gods, to whom the word of God was spoken, and the scripture cannot be broken;

36 Do you say of him whom the Father hath sanctified and sent into the world: Thou blasphemest, because I said, I am the Son of God?

37 If I do not the works of my Father, believe me not.

38 But if I do, though you will not believe me, believe the works: that you may know and believe that the Father is in me, and I in the Father.

39 They sought therefore to take him; and he escaped out of their hands.

40 And he went again beyond the Jordan, into that place where John was baptizing first; and there he abode.

41 And many resorted to him, and they said: John indeed did no sign.

42 But all things whatsoever John said of this man, were true. And many believed in him.

The readings on this page are taken from the Douay-Rheims Catholic Bible. You can also read the Mass Readings taken from the New Jerusalem Bible, which is used at Mass in most of the English-speaking world. (References, Copyrights).
◄ March – 25 March – 27 ►
By Pradeep Augustine
Print
Facebook
WhatsApp
Twitter
Pinterest
Linkedin
Email
Telegram
LINE
Viber