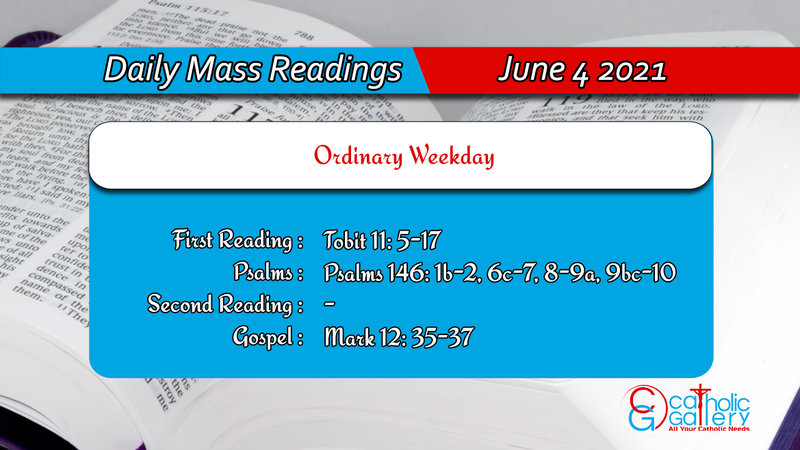 5 But Anna sat beside the way daily, on the top of a hill, from whence she might see afar off.

6 And while she watched his coming from that place, she saw him afar off, and presently perceived it was her son coming: and returning she told her husband, saying: Behold thy son cometh.

7 And Raphael said to Tobias: As soon as thou shalt come into thy house, forthwith adore the Lord thy God: and giving thanks to him, go to thy father, and kiss him.

8 And immediately anoint his eyes with this gall of the fish, which thou carriest with thee. For be assured that his eyes shall be presently opened, and thy father shall see the light of heaven, and shall rejoice in the sight of thee.

9 Then the dog, which had been with them in the way, ran before, and coming as if he had brought the news, shewed his joy by his fawning and wagging his tail. And his father that was blind, rising up, began to run stumbling with his feet: and giving a servant his hand, went to meet his son.

10 And receiving him kissed him, as did also his wife, and they began to weep for joy. And when they had adored God, and given him thanks, they sat down together.

11 Then Tobias taking of the gall of the fish, anointed his father’s eyes.

12 And he stayed about half an hour: and a white skin began to come out of his eyes, like the skin of an egg.

13 And Tobias took hold of it, and drew it from his eyes, and immediately he recovered his sight.

14 And they glorified God, both he and his wife and all that knew them.

15 And Tobias said: I bless thee, O Lord God of Israel, because thou hast chastised me, and thou hast saved me: and behold I see Tobias my son.

16 And after seven days Sara his son’s wife, and all the family arrived safe, and the cattle, and the camels, and an abundance of money of his wife’s: and that money also which he had received of Gabelus:

17 And he told his parents all the benefits of God, which he had done to him by the man that conducted him.

2 I will sing to my God as long as I shall be. Put not your trust in princes:

6 Who made heaven and earth, the sea, and all things that are in them.

7 Who keepeth truth for ever: who executeth judgment for them that suffer wrong: who giveth food to the hungry. The Lord looseth them that are fettered:

8 The Lord enlighteneth the blind. The Lord lifteth up them that are cast down: the Lord loveth the just.

9 The Lord keepeth the strangers, he will support the fatherless and the widow: and the ways of sinners he will destroy.

10 The Lord shall reign for ever: thy God, O Sion, unto generation and generation.

35 And Jesus answering, said, teaching in the temple: How do the scribes say, that Christ is the son of David?

36 For David himself saith by the Holy Ghost: The Lord said to my Lord, Sit on my right hand, until I make thy enemies thy footstool.

37 David therefore himself calleth him Lord, and whence is he then his son? And a great multitude heard him gladly.

The readings on this page are taken from the Douay-Rheims Catholic Bible. You can also read the Mass Readings taken from the New Jerusalem Bible, which is used at Mass in most of the English-speaking world. (References, Copyrights).
◄ June – 3June – 5 ►
ByPradeep Augustine
Print
Facebook
WhatsApp
Twitter
Pinterest
Linkedin
Email
Telegram
LINE
Viber