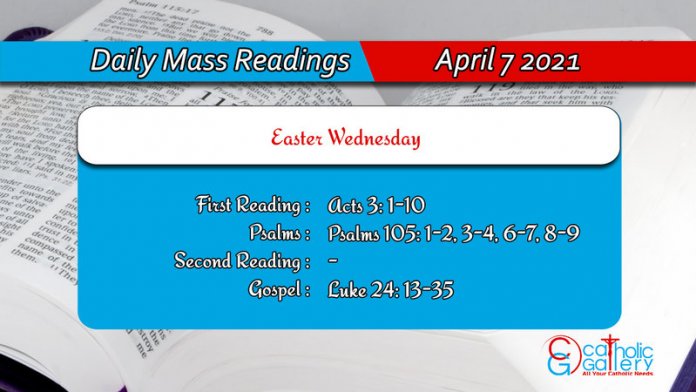 1 Now Peter and John went up into the temple at the ninth hour of prayer.

2 And a certain man who was lame from his mother’s womb, was carried: whom they laid every day at the gate of the temple, which is called Beautiful, that he might ask alms of them that went into the temple.

3 He, when he had seen Peter and John about to go into the temple, asked to receive an alms.

4 But Peter with John fastening his eyes upon him, said: Look upon us.

5 But he looked earnestly upon them, hoping that he should receive something of them.

6 But Peter said: Silver and gold I have none; but what I have, I give thee: In the name of Jesus Christ of Nazareth, arise, and walk.

7 And taking him by the right hand, he lifted him up, and forthwith his feet and soles received strength.

8 And he leaping up, stood, and walked, and went in with them into the temple, walking, and leaping, and praising God.

9 And all the people saw him walking and praising God.

10 And they knew him, that it was he who sat begging alms at the Beautiful gate of the temple: and they were filled with wonder and amazement at that which had happened to him.

The readings on this page are taken from the Douay-Rheims Catholic Bible. You can also read the Mass Readings taken from the New Jerusalem Bible, which is used at Mass in most of the English-speaking world. (References, Copyrights).
◄ April – 6 April – 8 ►
By Pradeep Augustine
Print
Facebook
WhatsApp
Twitter
Pinterest
Linkedin
Email
Telegram
LINE
Viber