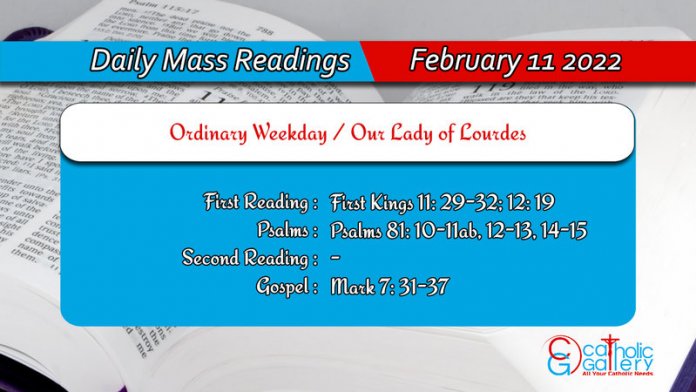 Ordinary Weekday / Our Lady of Lourdes

29 So it came to paste at that time, that Jeroboam went out of Jerusalem, and the prophet Ahias the Silonite, clad with a new garment, found him in the way: and they two were alone in the held.

30 And Ahias taking his new garment, wherewith he was clad, divided it into twelve parts:

31 And he said to Jeroboam: Take to thee ten pieces: for thus saith the Lord the God of Israel: Behold I will rend the kingdom out of the hand of Solomon, and will give thee ten tribes.

32 But one tribe shall remain to him for the sake of my servant David, and Jerusalem the city, which I have chosen out of all the tribes of Israel:

12:19 And Israel revolted from the house of David, unto this day.

10 There shall be no new god in thee: neither shalt thou adore a strange god.

11 For I am the Lord thy God, who brought thee out of the land of Egypt: open thy mouth wide, and I will fill it.

12 But my people heard not my voice: and Israel hearkened not to me.

13 So I let them go according to the desires of their heart: they shall walk in their own inventions.

14 If my people had heard me: if Israel had walked in my ways:

15 I should soon have humbled their enemies, and laid my hand on them that troubled them.

32 And they bring to him one deaf and dumb; and they besought him that he would lay his hand upon him.

33 And taking him from the multitude apart, he put his fingers into his ears, and spitting, he touched his tongue:

34 And looking up to heaven, he groaned, and said to him: Ephpheta, which is, Be thou opened.

35 And immediately his ears were opened, and the string of his tongue was loosed, and he spoke right.

37 And so much the more did they wonder, saying: He hath done all things well; he hath made both the deaf to hear, and the dumb to speak.

The readings on this page are taken from the Douay-Rheims Catholic Bible. You can also read the Mass Readings taken from the New Jerusalem Bible, which is used at Mass in most of the English-speaking world. (References, Copyrights).
◄ February – 10 February – 12 ►
By Pradeep Augustine
Print
Facebook
WhatsApp
Twitter
Pinterest
Linkedin
Email
Telegram
LINE
Viber