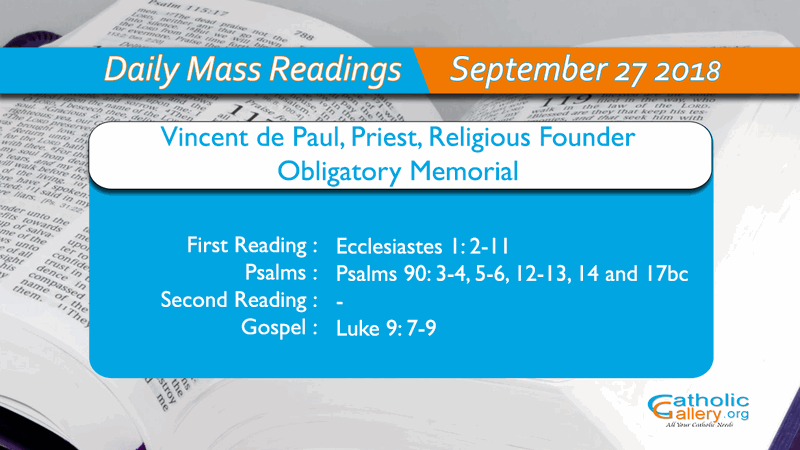 3 What hath a man more of all his labour, that he taketh under the sun?

4 One generation passeth away, and another generation cometh: but the earth standeth for ever.

5 The sun riseth, and goeth down, and returneth to his place: and there rising again,

6 Maketh his round by the south, and turneth again to the north: the spirit goeth forward surveying all places round about, and returneth to his circuits.

7 All the rivers run into the sea, yet the sea doth not overflow: unto the place from whence the rivers come, they return, to flow again.

8 All things are hard: man cannot explain them by word. The eye is not filled with seeing, neither is the ear filled with hearing.

10 Nothing under the sun is new, neither is any man able to say: Behold this is new: for it hath already gone before in the ages that were before us.

11 There is no remembrance of former things: nor indeed of those things which hereafter are to come, shall there be any remembrance with them that shall be in the latter end.

3 Turn not man away to be brought low: and thou hast said: Be converted, O ye sons of men.

4 For a thousand years in thy sight are as yesterday, which is past. And as a watch in the night,

5 Things that are counted nothing, shall their years be.

12 Can number thy wrath? So make thy right hand known: and men learned in heart, in wisdom.

13 Return, O Lord, how long? and be entreated in favour of thy servants.

14 We are filled in the morning with thy mercy: and we have rejoiced, and are delighted all our days.

17 And let the brightness of the Lord our God be upon us: and direct thou the works of our hands over us; yea, the work of our hands do thou direct.

7 Now Herod, the tetrarch, heard of all things that were done by him; and he was in a doubt, because it was said

8 By some, that John was risen from the dead: but by other some, that Elias had appeared; and by others, that one of the old prophets was risen again.

9 And Herod said: John I have beheaded; but who is this of whom I hear such things? And he sought to see him.

The readings on this page are taken from the Douay-Rheims Catholic Bible. You can also read the Mass Readings taken from the New Jerusalem Bible, which is used at Mass in most of the English-speaking world. (References, Copyrights).
◄ September 26September 28 ►
ByPradeep Augustine
Print
Facebook
WhatsApp
Twitter
Pinterest
Linkedin
Email
Telegram
LINE
Viber