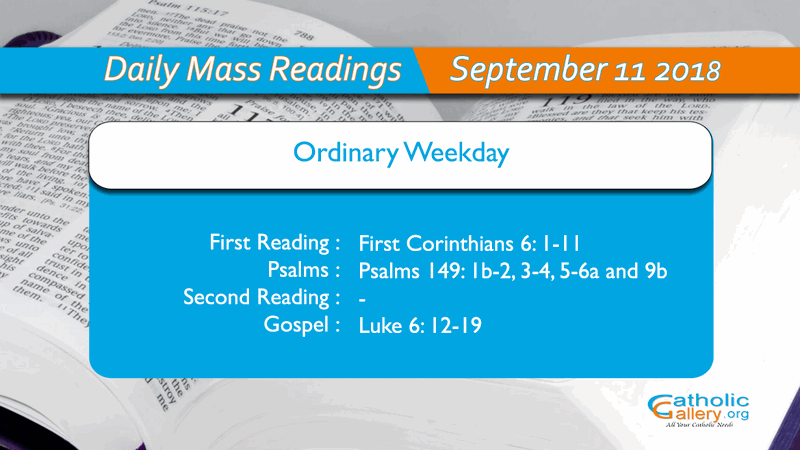 1 Dare any of you, having a matter against another, go to be judged before the unjust, and not before the saints?

2 Know you not that the saints shall judge this world? And if the world shall be judged by you, are you unworthy to judge the smallest matters?

3 Know you not that we shall judge angels? how much more things of this world?

4 If therefore you have judgments of things pertaining to this world, set them to judge, who are the most despised in the church.

5 I speak to your shame. Is it so that there is not among you any one wise man, that is able to judge between his brethren?

6 But brother goeth to law with brother, and that before unbelievers.

8 But you do wrong and defraud, and that to your brethren.

9 Know you not that the unjust shall not possess the kingdom of God? Do not err: neither fornicators, nor idolaters, nor adulterers,

10 Nor the effeminate, nor liers with mankind, nor thieves, nor covetous, nor drunkards, nor railers, nor extortioners, shall possess the kingdom of God.

1 Sing ye to the Lord a new canticle: let his praise be in the church of the saints.

2 Let Israel rejoice in him that made him: and let the children of Sion be joyful in their king.

3 Let them praise his name in choir: let them sing to him with the timbrel and the psaltery.

4 For the Lord is well pleased with his people: and he will exalt the meek unto salvation.

5 The saints shall rejoice in glory: they shall be joyful in their beds.

6 The high praise of God shall be in their mouth: and two-edged swords in their hands:

9 To execute upon them the judgment that is written: this glory is to all his saints. Alleluia.

12 And it came to pass in those days, that he went out into a mountain to pray, and he passed the whole night in the prayer of God.

13 And when day was come, he called unto him his disciples; and he chose twelve of them (whom also he named apostles).

14 Simon, whom he surnamed Peter, and Andrew his brother, James and John, Philip and Bartholomew,

15 Matthew and Thomas, James the son of Alpheus, and Simon who is called Zelotes,

16 And Jude, the brother of James, and Judas Iscariot, who was the traitor.

17 And coming down with them, he stood in a plain place, and the company of his disciples, and a very great multitude of people from all Judea and Jerusalem, and the sea coast both of Tyre and Sidon,

18 Who were come to hear him, and to be healed of their diseases. And they that were troubled with unclean spirits, were cured.

19 And all the multitude sought to touch him, for virtue went out from him, and healed all.

The readings on this page are taken from the Douay-Rheims Catholic Bible. You can also read the Mass Readings taken from the New Jerusalem Bible, which is used at Mass in most of the English-speaking world. (References, Copyrights).
◄ September 10September 12 ►
ByPradeep Augustine
Print
Facebook
WhatsApp
Twitter
Pinterest
Linkedin
Email
Telegram
LINE
Viber