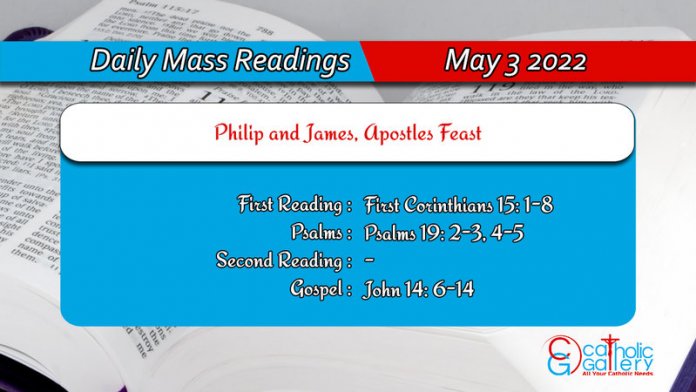 1 Now I make known unto you, brethren, the gospel which I preached to you, which also you have received, and wherein you stand;

2 By which also you are saved, if you hold fast after what manner I preached unto you, unless you have believed in vain.

3 For I delivered unto you first of all, which I also received: how that Christ died for our sins, according to the scriptures:

4 And that he was buried, and that he rose again the third day, according to the scriptures:

5 And that he was seen by Cephas; and after that by the eleven.

6 Then he was seen by more than five hundred brethren at once: of whom many remain until this present, and some are fallen asleep.

7 After that, he was seen by James, then by all the apostles.

8 And last of all, he was seen also by me, as by one born out of due time.

2 The heavens shew forth the glory of God, and the firmament declareth the work of his hands.

4 There are no speeches nor languages, where their voices are not heard.

5 Their sound hath gone forth into all the earth: and their words unto the ends of the world.

6 Jesus saith to him: I am the way, and the truth, and the life. No man cometh to the Father, but by me.

7 If you had known me, you would without doubt have known my Father also: and from henceforth you shall know him, and you have seen him.

8 Philip saith to him: Lord, shew us the Father, and it is enough for us.

9 Jesus saith to him: Have I been so long a time with you; and have you not known me? Philip, he that seeth me seeth the Father also. How sayest thou, shew us the Father?

10 Do you not believe, that I am in the Father, and the Father in me? The words that I speak to you, I speak not of myself. But the Father who abideth in me, he doth the works.

11 Believe you not that I am in the Father, and the Father in me?

12 Otherwise believe for the very works’ sake. Amen, amen I say to you, he that believeth in me, the works that I do, he also shall do; and greater than these shall he do.

13 Because I go to the Father: and whatsoever you shall ask the Father in my name, that will I do: that the Father may be glorified in the Son.

14 If you shall ask me any thing in my name, that I will do.

The readings on this page are taken from the Douay-Rheims Catholic Bible. You can also read the Mass Readings taken from the New Jerusalem Bible, which is used at Mass in most of the English-speaking world. (References, Copyrights)
◄ May – 2 May – 4 ►

737,160FansLike
101FollowersFollow
56SubscribersSubscribe
Free Email Updates
Get the Daily Mass Readings, Prayers and Quotes right from your inbox for free.
Give it a try, you can unsubscribe anytime.