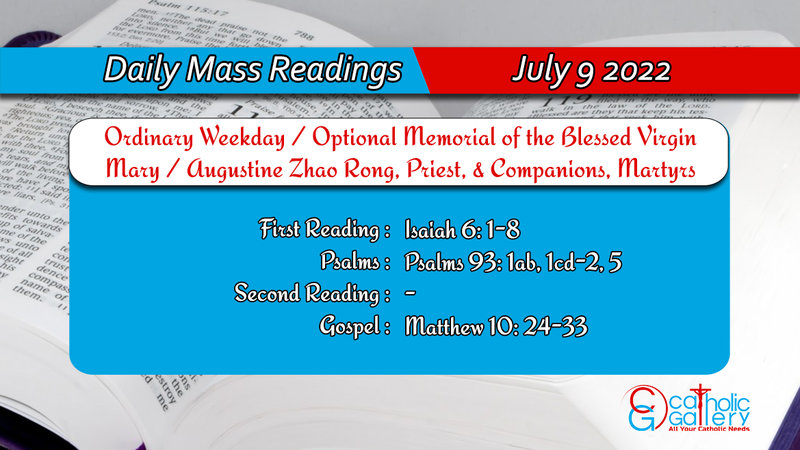 1 In the year that king Ozias died, I saw the Lord sitting upon a throne high and elevated: and his train filled the temple.

3 And they cried one to another, and said: Holy, holy, holy, the Lord God of hosts, all the earth is full of his glory.

4 And the lintels of the doors were moved at the voice of him that cried, and the house was filled with smoke.

6 And one of the seraphims flew to me, and in his hand was a live coal, which he had taken with the tongs off the altar.

7 And he touched my mouth, and said: Behold this hath touched thy lips, and thy iniquities shall be taken away, and thy sin shall be cleansed.

8 And I heard the voice of the Lord, saying: Whom shall I send? and who shall go for us? And I said: Lo, here am I, send me.

1 The Lord hath reigned, he is clothed with beauty: the Lord is clothed with strength, and hath girded himself. For he hath established the world which shall not be moved.

2 Thy throne is prepared from of old: thou art from everlasting.

5 Thy testimonies are become exceedingly credible: holiness becometh thy house, O Lord, unto length of days.

24 The disciple is not above the master, nor the servant above his lord.

25 It is enough for the disciple that he be as his master, and the servant as his lord. If they have called the goodman of the house Beelzebub, how much more them of his household?

27 That which I tell you in the dark, speak ye in the light: and that which you hear in the ear, preach ye upon the housetops.

28 And fear ye not them that kill the body, and are not able to kill the soul: but rather fear him that can destroy both soul and body in hell.

29 Are not two sparrows sold for a farthing? and not one of them shall fall on the ground without your Father.

30 But the very hairs of your head are all numbered.

31 Fear not therefore: better are you than many sparrows.

32 Every one therefore that shall confess me before men, I will also confess him before my Father who is in heaven.

33 But he that shall deny me before men, I will also deny him before my Father who is in heaven.

The readings on this page are taken from the Douay-Rheims Catholic Bible. You can also read the Mass Readings taken from the New Jerusalem Bible, which is used at Mass in most of the English-speaking world. (References, Copyrights)
◄ July – 8July – 10 ►
ByPradeep Augustine
Print
Facebook
WhatsApp
Twitter
Pinterest
Linkedin
Email
Telegram
LINE
Viber