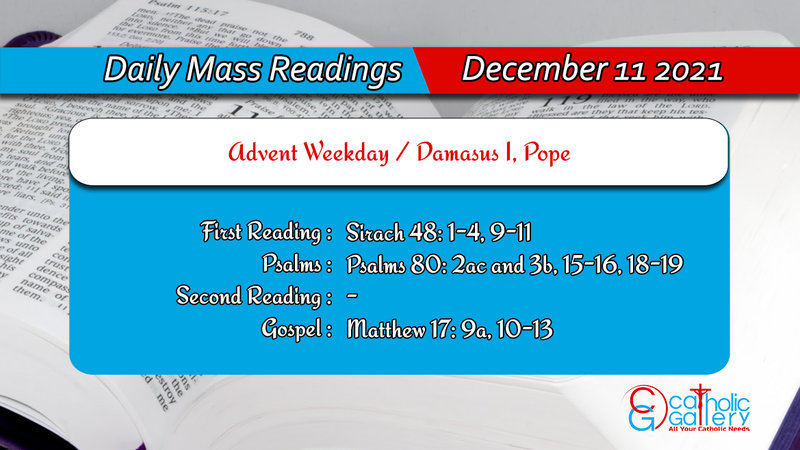 1 And Elias the prophet stood up, as a fire, and his word burnt like a torch.

2 He brought a famine upon them, and they that provoked him in their envy, were reduced to a small number, for they could not endure the commandments of the Lord.

3 By the word of the Lord he shut up the heaven, and he brought down fire from heaven thrice.

4 Thus was Elias magnified in his wondrous works. And who can glory like to thee?

9 Who wast taken up in a whirlwind of fire, in a chariot of fiery horses.

10 Who art registered in the judgments of times to appease the wrath of the Lord, to reconcile the heart of the father to the son, and to restore the tribes of Jacob.

11 Blessed are they that saw thee, and were honoured with thy friendship.

2 Give ear, O thou that rulest Israel: thou that leadest Joseph like a sheep. Thou that sittest upon the cherubims, shine forth

3 Before Ephraim, Benjamin, and Manasses. Stir up thy might, and come to save us.

15 Turn again, O God of hosts, look down from heaven, and see, and visit this vineyard:

16 And perfect the same which thy right hand hath planted: and upon the son of man whom thou hast confirmed for thyself.

18 Let thy hand be upon the man of thy right hand: and upon the son of man whom thou hast confirmed for thyself.

19 And we depart not from thee, thou shalt quicken us: and we will call upon thy name.

9 And as they came down from the mountain, Jesus charged them, saying: Tell the vision to no man, till the Son of man be risen from the dead.

10 And his disciples asked him, saying: Why then do the scribes say that Elias must come first?

11 But he answering, said to them: Elias indeed shall come, and restore all things.

12 But I say to you, that Elias is already come, and they knew him not, but have done unto him whatsoever they had a mind. So also the Son of man shall suffer from them.

13 Then the disciples understood, that he had spoken to them of John the Baptist.

The readings on this page are taken from the Douay-Rheims Catholic Bible. You can also read the Mass Readings taken from the New Jerusalem Bible, which is used at Mass in most of the English-speaking world. (References, Copyrights).
◄ December – 10December – 12 ►
ByPradeep Augustine
Print
Facebook
WhatsApp
Twitter
Pinterest
Linkedin
Email
Telegram
LINE
Viber