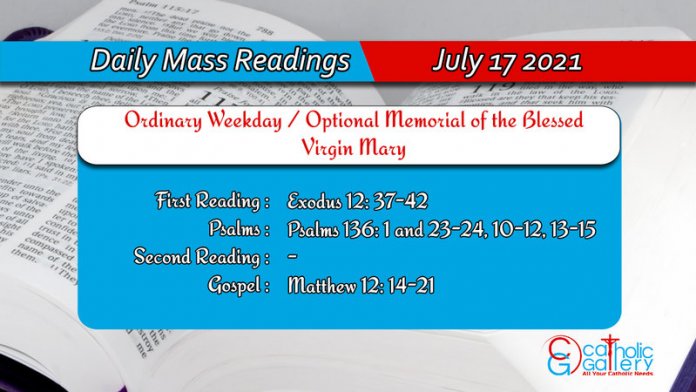 37 And the children of Israel set forward from Ramesse to Socoth, being about six hundred thousand men on foot, beside children.

38 And a mixed multitude without number went up also with them, sheep and herds and beasts of divers kinds, exceeding many.

39 And they baked the meal, which a little before they had brought out of Egypt, in dough: and they made earth cakes unleavened: for it could not be leavened, the Egyptians pressing them to depart, and not suffering them to make any stay: neither did they think of preparing any meat.

40 And the abode of the children of Israel that they made in Egypt, was four hundred and thirty years.

41 Which being expired, the same day all the army of the Lord went forth out of the land of Egypt.

42 This is the observable night of the Lord, when he brought them forth out of the land of Egypt: this night all the children of Israel must observe in their generations.

1 Praise the Lord, for he is good: for his mercy endureth for ever.

23 For he was mindful of us in our affliction: for his mercy endureth for ever.

24 And he redeemed us from our enemies: for his mercy endureth for ever.

10 Who smote Egypt with their firstborn: for his mercy endureth for ever.

11 Who brought Israel from among them: for his mercy endureth for ever.

12 With a mighty hand and a stretched out arm: for his mercy endureth for ever.

13 Who divided the Red Sea into parts: for his mercy endureth for ever.

14 And brought out Israel through the midst thereof: for his mercy endureth for ever.

15 And overthrew Pharao and his host in the Red Sea: for his mercy endureth for ever.

14 And the Pharisees going out made a consultation against him, how they might destroy him.

15 But Jesus knowing it, retired from thence: and many followed him, and he healed them all.

16 And he charged them that they should not make him known.

17 That it might be fulfilled which was spoken by Isaias the prophet, saying:

18 Behold my servant whom I have chosen, my beloved in whom my soul hath been well pleased. I will put my spirit upon him, and he shall shew judgment to the Gentiles.

19 He shall not contend, nor cry out, neither shall any man hear his voice in the streets.

20 The bruised reed he shall not break: and smoking flax he shall not extinguish: till he send forth judgment unto victory.

21 And in his name the Gentiles shall hope.

The readings on this page are taken from the Douay-Rheims Catholic Bible. You can also read the Mass Readings taken from the New Jerusalem Bible, which is used at Mass in most of the English-speaking world. (References, Copyrights).
◄ July – 16 July – 18 ►
By Pradeep Augustine
Print
Facebook
WhatsApp
Twitter
Pinterest
Linkedin
Email
Telegram
LINE
Viber