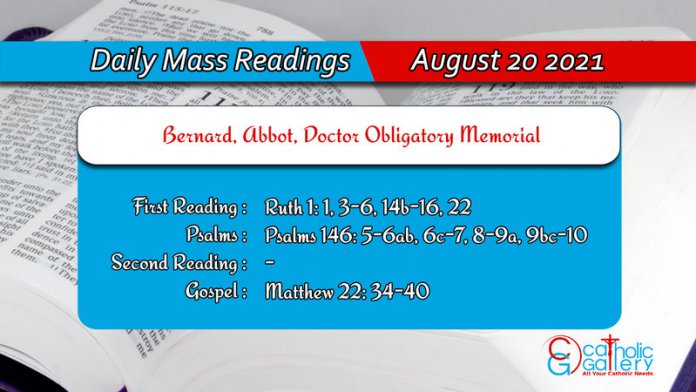 1 In the days of one of the judges, when the judges ruled, there came a famine in the land. And a certain man of Bethlehem Juda, went to sojourn in the land of Moab with his wife and his two sons.

3 And Elimelech the husband of Noemi died: and she remained with her sons.

4 And they took wives of the women of Moab, of which one was called Orpha, and the other Ruth. And they dwelt there ten years.

5 And they both died, to wit, Mahalon and Chelion: and the woman was left alone, having lost both her sons and her husband.

6 And she arose to go from the land of Moab to her own country with both her daughters in law: for she had heard that the Lord had looked upon his people, and had given them food.

15 And Noemi said to her: Behold thy kinswoman is returned to her people, and to her gods, go thou with her.

16 She answered: Be not against me, to desire that I should leave thee and depart: for whithersoever thou shalt go, I will go: and where thou shalt dwell, I also will dwell. Thy people shall be my people, and thy God my God.

22 So Noemi came with Ruth the Moabitess her daughter in law, from the land of her sojournment: and returned into Bethlehem, in the beginning of the barley harvest.

5 Blessed is he who hath the God of Jacob for his helper, whose hope is in the Lord his God:

6 Who made heaven and earth, the sea, and all things that are in them.

7 Who keepeth truth for ever: who executeth judgment for them that suffer wrong: who giveth food to the hungry. The Lord looseth them that are fettered:

8 The Lord enlighteneth the blind. The Lord lifteth up them that are cast down: the Lord loveth the just.

9 The Lord keepeth the strangers, he will support the fatherless and the widow: and the ways of sinners he will destroy.

10 The Lord shall reign for ever: thy God, O Sion, unto generation and generation.

34 But the Pharisees hearing that he had silenced the Sadducees, came together:

35 And one of them, a doctor of the law, asking him, tempting him:

36 Master, which is the greatest commandment in the law?

38 This is the greatest and the first commandment.

39 And the second is like to this: Thou shalt love thy neighbour as thyself.

40 On these two commandments dependeth the whole law and the prophets.

The readings on this page are taken from the Douay-Rheims Catholic Bible. You can also read the Mass Readings taken from the New Jerusalem Bible, which is used at Mass in most of the English-speaking world. (References, Copyrights)
◄ August – 19 August – 21 ►