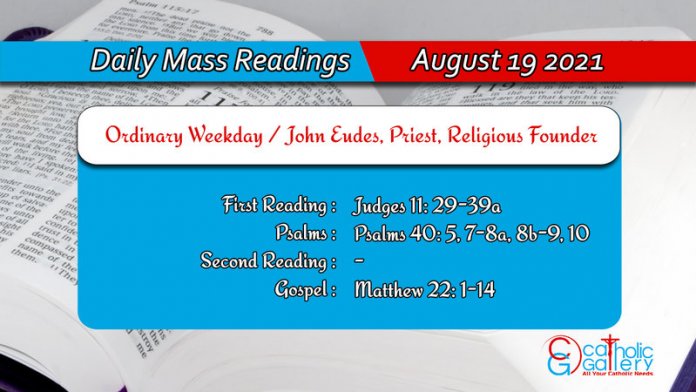 29 Therefore the spirit of the Lord came upon Jephte, and going round Galaad, and Manasses, and Maspha of Galaad, and passing over from thence to the children of Ammon,

30 He made a vow to the Lord, saying: If thou wilt deliver the children of Ammon into my hands,

31 Whosoever shall first come forth out of the doors of my house, and shall meet me when I return in peace from the children of Ammon, the same will I offer a holocaust to the Lord.

32 And Jephte passed over to the children of Ammon, to fight against them: and the Lord delivered them into his hands.

33 And he smote them from Aroer till you come to Mennith, twenty cities, and as far as Abel, which is set with vineyards, with a very great slaughter: and the children of Ammon were humbled by the children of Israel.

34 And when Jephte returned into Maspha to his house, his only daughter met him with timbrels and with dances: for he had no other children.

35 And when he saw her, he rent his garments, and said: Alas! my daughter, thou hast deceived me, and thou thyself art deceived: for I have opened my mouth to the Lord, and I can do no other thing.

36 And she answered him: My father, if thou hast opened thy mouth to the Lord, do unto me whatsoever thou hast promised, since the victory hath been granted to thee, and revenge of thy enemies.

37 And she said to her father: Grant me only this which I desire: Let me go, that I may go about the mountains for two months, and may bewail my virginity with my companions.

38 And he answered her: Go. And he sent her away for two months. And when she was gone with her comrades and companions, she mourned her virginity in the mountains.

39 And the two months being expired, she returned to her father, and he did to her as he had vowed, and she knew no man. From thence came a fashion in Israel, and a custom has been kept:

5 Blessed is the man whose trust is in the name of the Lord; and who hath not had regard to vanities, and lying follies.

1 And Jesus answering, spoke again in parables to them, saying:

2 The kingdom of heaven is likened to a king, who made a marriage for his son.

3 And he sent his servants, to call them that were invited to the marriage; and they would not come.

4 Again he sent other servants, saying: Tell them that were invited, Behold, I have prepared my dinner; my calves and fatlings are killed, and all things are ready: come ye to the marriage.

5 But they neglected, and went their own ways, one to his farm, and another to his merchandise.

6 And the rest laid hands on his servants, and having treated them contumeliously, put them to death.

7 But when the king had heard of it, he was angry, and sending his armies, he destroyed those murderers, and burnt their city.

8 Then he saith to his servants: The marriage indeed is ready; but they that were invited were not worthy.

9 Go ye therefore into the highways; and as many as you shall find, call to the marriage.

10 And his servants going forth into the ways, gathered together all that they found, both bad and good: and the marriage was filled with guests.

11 And the king went in to see the guests: and he saw there a man who had not on a wedding garment.

12 And he saith to him: Friend, how camest thou in hither not having a wedding garment? But he was silent.

13 Then the king said to the waiters: Bind his hands and feet, and cast him into the exterior darkness: there shall be weeping and gnashing of teeth.

14 For many are called, but few are chosen.

The readings on this page are taken from the Douay-Rheims Catholic Bible. You can also read the Mass Readings taken from the New Jerusalem Bible, which is used at Mass in most of the English-speaking world. (References, Copyrights).
◄ August – 18 August – 20 ►
By Pradeep Augustine
Print
Facebook
WhatsApp
Twitter
Pinterest
Linkedin
Email
Telegram
LINE
Viber