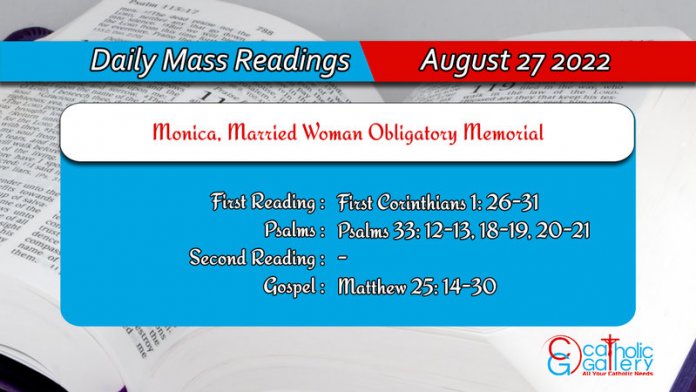 26 For see your vocation, brethren, that there are not many wise according to the flesh, not many mighty, not many noble:

29 That no flesh should glory in his sight.

30 But of him are you in Christ Jesus, who of God is made unto us wisdom, and justice, and sanctification, and redemption:

31 That, as it is written: He that glorieth, may glory in the Lord.

12 Blessed is the nation whose God is the Lord: the people whom he hath chosen for his inheritance.

13 The Lord hath looked from heaven: he hath beheld all the sons of men.

20 Our soul waiteth for the Lord: for he is our helper and protector.

21 For in him our heart shall rejoice: and in his holy name we have trusted.

14 For even as a man going into a far country, called his servants, and delivered to them his goods;

16 And he that had received the five talents, went his way, and traded with the same, and gained other five.

17 And in like manner he that had received the two, gained other two.

18 But he that had received the one, going his way digged into the earth, and hid his lord’s money.

19 But after a long time the lord of those servants came, and reckoned with them.

21 His lord said to him: Well done, good and faithful servant, because thou hast been faithful over a few things, I will place thee over many things: enter thou into the joy of thy lord.

22 And he also that had received the two talents came and said: Lord, thou deliveredst two talents to me: behold I have gained other two.

23 His lord said to him: Well done, good and faithful servant: because thou hast been faithful over a few things, I will place thee over many things: enter thou into the joy of thy lord.

25 And being afraid I went and hid thy talent in the earth: behold here thou hast that which is thine.

26 And his lord answering, said to him: Wicked and slothful servant, thou knewest that I reap where I sow not, and gather where I have not strewed:

27 Thou oughtest therefore to have committed my money to the bankers, and at my coming I should have received my own with usury.

28 Take ye away therefore the talent from him, and give it to him that hath ten talents.

29 For to every one that hath shall be given, and he shall abound: but from him that hath not, that also which he seemeth to have shall be taken away.

30 And the unprofitable servant cast ye out into the exterior darkness. There shall be weeping and gnashing of teeth.

The readings on this page are taken from the Douay-Rheims Catholic Bible. You can also read the Mass Readings taken from the New Jerusalem Bible, which is used at Mass in most of the English-speaking world. (References, Copyrights)
◄ August – 26 August – 28 ►
By Pradeep Augustine
Print
Facebook
WhatsApp
Twitter
Pinterest
Linkedin
Email
Telegram
LINE
Viber