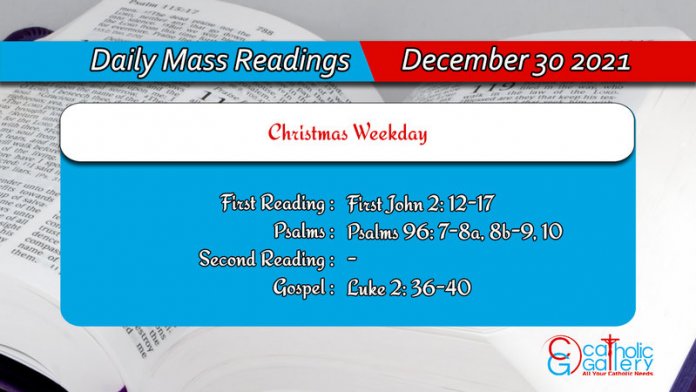 12 I write unto you, little children, because your sins are forgiven you for his name’s sake.

15 Love not the world, nor the things which are in the world. If any man love the world, the charity of the Father is not in him.

17 And the world passeth away, and the concupiscence thereof: but he that doth the will of God, abideth for ever.

8 Bring to the Lord glory unto his name. Bring up sacrifices, and come into his courts:

9 Adore ye the Lord in his holy court. Let all the earth be moved at his presence.

10 Say ye among the Gentiles, the Lord hath reigned. For he hath corrected the world, which shall not be moved: he will judge the people with justice.

36 And there was one Anna, a prophetess, the daughter of Phanuel, of the tribe of Aser; she was far advanced in years, and had lived with her husband seven years from her virginity.

37 And she was a widow until fourscore and four years; who departed not from the temple, by fastings and prayers serving night and day.

38 Now she, at the same hour, coming in, confessed to the Lord; and spoke of him to all that looked for the redemption of Israel.

39 And after they had performed all things according to the law of the Lord, they returned into Galilee, to their city Nazareth.

40 And the child grew, and waxed strong, full of wisdom; and the grace of God was in him.

The readings on this page are taken from the Douay-Rheims Catholic Bible. You can also read the Mass Readings taken from the New Jerusalem Bible, which is used at Mass in most of the English-speaking world. (References, Copyrights).
◄ December – 29 December – 31 ►
By Pradeep Augustine
Print
Facebook
WhatsApp
Twitter
Pinterest
Linkedin
Email
Telegram
LINE
Viber