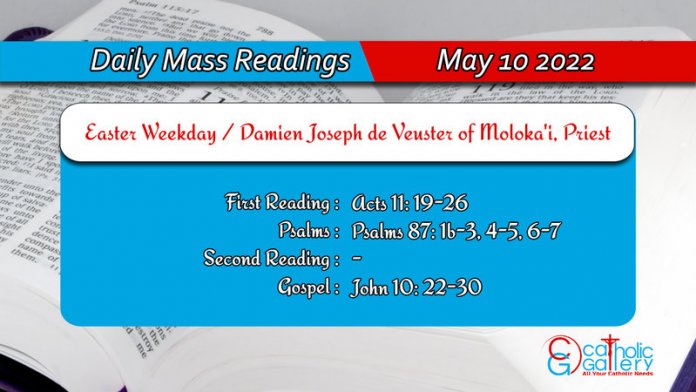 19 Now they who had been dispersed by the persecution that arose on occasion of Stephen, went about as far as Phenice and Cyprus and Antioch, speaking the word to none, but to the Jews only.

20 But some of them were men of Cyprus and Cyrene, who, when they were entered into Antioch, spoke also to the Greeks, preaching the Lord Jesus.

21 And the hand of the Lord was with them: and a great number believing, were converted to the Lord.

22 And the tidings came to the ears of the church that was at Jerusalem, touching these things: and they sent Barnabas as far as Antioch.

23 Who, when he was come, and had seen the grace of God, rejoiced: and he exhorted them all with purpose of heart to continue in the Lord.

24 For he was a good man, and full of the Holy Ghost and of faith. And a great multitude was added to the Lord.

25 And Barnabas went to Tarsus to seek Saul: whom, when he had found, he brought to Antioch.

26 And they conversed there in the church a whole year; and they taught a great multitude, so that at Antioch the disciples were first named Christians.

1 For the sons of Core, a psalm of a canticle. The foundations thereof are in the holy mountains:

2 The Lord loveth the gates of Sion above all the tabernacles of Jacob.

3 Glorious things are said of thee, O city of God.

4 I will be mindful of Rahab and of Babylon knowing me. Behold the foreigners, and Tyre, and the people of the Ethiopians, these were there.

5 Shall not Sion say: This man and that man is born in her? and the Highest himself hath founded her.

6 The Lord shall tell in his writings of peoples and of princes, of them that have been in her.

7 The dwelling in thee is as it were of all rejoicing.

22 And it was the feast of the dedication at Jerusalem: and it was winter.

23 And Jesus walked in the temple, in Solomon’s porch.

24 The Jews therefore came round about him, and said to him: How long dost thou hold our souls in suspense? If thou be the Christ, tell us plainly.

25 Jesus answered them: I speak to you, and you believe not: the works that I do in the name of my Father, they give testimony of me.

26 But you do not believe, because you are not of my sheep.

27 My sheep hear my voice: and I know them, and they follow me.

28 And I give them life everlasting; and they shall not perish for ever, and no man shall pluck them out of my hand.

29 That which my Father hath given me, is greater than all: and no one can snatch them out of the hand of my Father.

The readings on this page are taken from the Douay-Rheims Catholic Bible. You can also read the Mass Readings taken from the New Jerusalem Bible, which is used at Mass in most of the English-speaking world. (References, Copyrights).
◄ May – 9 May – 11 ►
By Pradeep Augustine
Print
Facebook
WhatsApp
Twitter
Pinterest
Linkedin
Email
Telegram
LINE
Viber