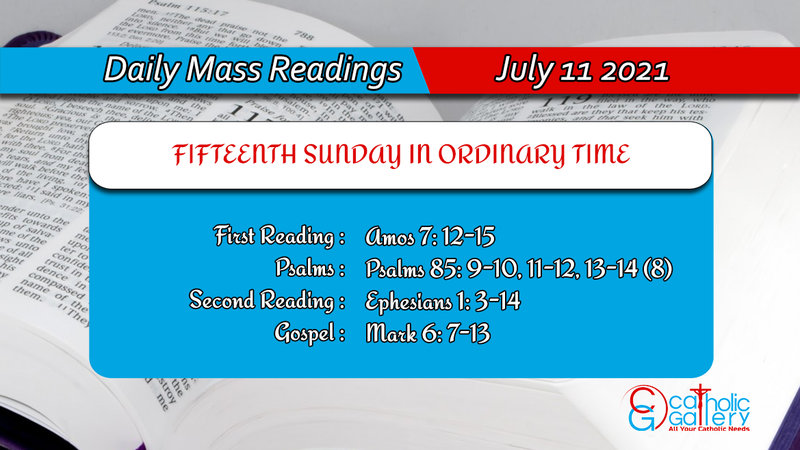 12 And Amasias said to Amos: Thou seer, go, flee away into the land of Juda: and eat bread there, and prophesy there.

13 But prophesy not again any more in Bethel: because it is the king’s sanctuary, and it is the house of the kingdom.

14 And Amos answered and said to Amasias: I am not a prophet, nor am I the son of a prophet: but I am a herdsman plucking wild figs.

15 And the Lord took me when I followed the flock, and the Lord said to me: Go, prophesy to my people Israel.

9 I will hear what the Lord God will speak in me: for he will speak peace unto his people: And unto his saints: and unto them that are converted to the heart.

10 Surely his salvation is near to them that fear him: that glory may dwell in our land.

11 Mercy and truth have met each other: justice and peace have kissed.

12 Truth is sprung out of the earth: and justice hath looked down from heaven.

13 For the Lord will give goodness: and our earth shall yield her fruit.

14 Justice shall walk before him: and shall set his steps in the way.

3 Blessed be the God and Father of our Lord Jesus Christ, who hath blessed us with spiritual blessings in heavenly places, in Christ:

4 As he chose us in him before the foundation of the world, that we should be holy and unspotted in his sight in charity.

5 Who hath predestinated us unto the adoption of children through Jesus Christ unto himself: according to the purpose of his will:

6 Unto the praise of the glory of his grace, in which he hath graced us in his beloved son.

7 In whom we have redemption through his blood, the remission of sins, according to the riches of his grace,

8 Which hath superabounded in us in all wisdom and prudence,

9 That he might make known unto us the mystery of his will, according to his good pleasure, which he hath purposed in him,

10 In the dispensation of the fulness of times, to re-establish all things in Christ, that are in heaven and on earth, in him.

12 That we may be unto the praise of his glory, we who before hoped Christ:

13 In whom you also, after you had heard the word of truth, (the gospel of your salvation;) in whom also believing, you were signed with the holy Spirit of promise,

14 Who is the pledge of our inheritance, unto the redemption of acquisition, unto the praise of his glory.

7 And he called the twelve; and began to send them two and two, and gave them power over unclean spirits.

8 And he commanded them that they should take nothing for the way, but a staff only: no scrip, no bread, nor money in their purse,

9 But to be shod with sandals, and that they should not put on two coats.

10 And he said to them: Wheresoever you shall enter into an house, there abide till you depart from that place.

11 And whosoever shall not receive you, nor hear you; going forth from thence, shake off the dust from your feet for a testimony to them.

12 And going forth they preached that men should do penance:

13 And they cast out many devils, and anointed with oil many that were sick, and healed them.

The readings on this page are taken from the Douay-Rheims Catholic Bible. You can also read the Mass Readings taken from the New Jerusalem Bible, which is used at Mass in most of the English-speaking world. (References, Copyrights).
◄ July – 10July – 12 ►
ByPradeep Augustine
Print
Facebook
WhatsApp
Twitter
Pinterest
Linkedin
Email
Telegram
LINE
Viber