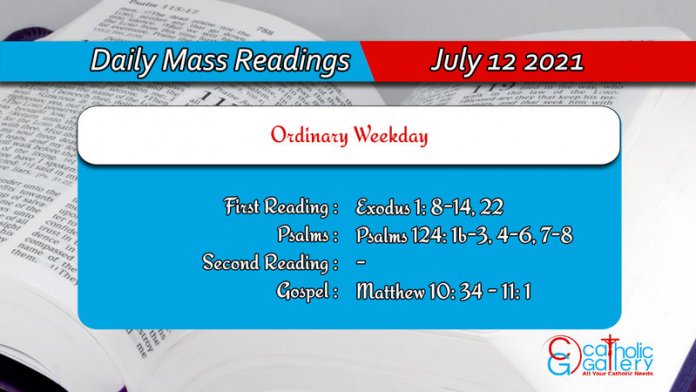 8 In the mean time there arose a new king over Egypt, that knew not Joseph:

9 And he said to his people: Behold the people of the children of Israel are numerous and stronger than we.

10 Come, let us wisely oppress them, lest they multiply: and if any war shall rise against us, join with our enemies, and having overcome us, depart out of the land.

11 Therefore he set over them masters of the works, to afflict them with burdens, and they built for Pharao cities of tabernacles, Phithom and Ramesses.

13 And the Egyptians hated the children of Israel, and afflicted them and mocked them:

14 And they made their life bitter with hard works in clay, and brick, and with all manner of service, wherewith they were overcharged in the works of the earth.

22 Pharao therefore charged all his people, saying: Whatsoever shall be born of the male sex, ye shall cast into the river: whatsoever of the female, ye shall save alive.

1 If it had not been that the Lord was with us, let Israel now say:

2 If it had not been that the Lord was with us, When men rose up against us,

3 Perhaps they had swallowed us up alive. When their fury was enkindled against us,

4 Perhaps the waters had swallowed us up.

6 Blessed be the Lord, who hath not given us to be a prey to their teeth.

7 Our soul hath been delivered as a sparrow out of the snare of the fowlers. The snare is broken, and we are delivered.

8 Our help is in the name of the Lord, who made heaven and earth.

36 And a man’s enemies shall be they of his own household.

38 And he that taketh not up his cross, and followeth me, is not worthy of me.

39 He that findeth his life, shall lose it: and he that shall lose his life for me, shall find it.

42 And whosoever shall give to drink to one of these little ones a cup of cold water only in the name of a disciple, amen I say to you, he shall not lose his reward.

11:1 And it came to pass, when Jesus had made an end of commanding his twelve disciples, he passed from thence, to teach and preach in their cities.

The readings on this page are taken from the Douay-Rheims Catholic Bible. You can also read the Mass Readings taken from the New Jerusalem Bible, which is used at Mass in most of the English-speaking world. (References, Copyrights).
◄ July – 11 July – 13 ►
By Pradeep Augustine
Print
Facebook
WhatsApp
Twitter
Pinterest
Linkedin
Email
Telegram
LINE
Viber