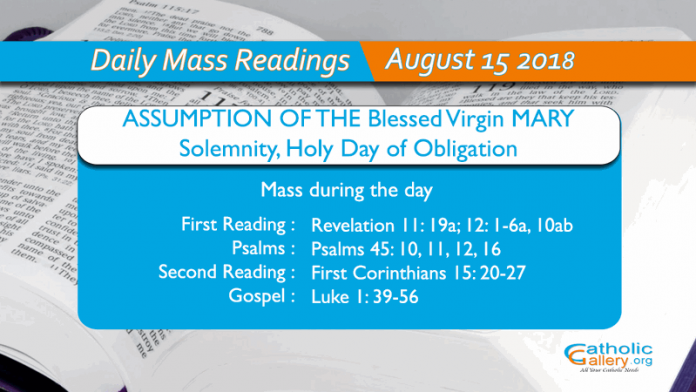 Mass During the Day

19 And the temple of God was opened in heaven: and the ark of his testament was seen in his temple, and there were lightnings, and voices, and an earthquake, and great hail.

1 And a great sign appeared in heaven: A woman clothed with the sun, and the moon under her feet, and on her head a crown of twelve stars:

2 And being with child, she cried travailing in birth, and was in pain to be delivered.

3 And there was seen another sign in heaven: and behold a great red dragon, having seven heads, and ten horns: and on his head seven diadems:

4 And his tail drew the third part of the stars of heaven, and cast them to the earth: and the dragon stood before the woman who was ready to be delivered; that, when she should be delivered, he might devour her son.

5 And she brought forth a man child, who was to rule all nations with an iron rod: and her son was taken up to God, and to his throne.

6 And the woman fled into the wilderness, where she had a place prepared by God, that there they should feed her a thousand two hundred sixty days.

10 And I heard a loud voice in heaven, saying: Now is come salvation, and strength, and the kingdom of our God, and the power of his Christ: because the accuser of our brethren is cast forth, who accused them before our God day and night.

10 The daughters of kings have delighted thee in thy glory. The queen stood on thy right hand, in gilded clothing; surrounded with variety.

11 Hearken, O daughter, and see, and incline thy ear: and forget thy people and thy father’s house.

12 And the king shall greatly desire thy beauty; for he is the Lord thy God, and him they shall adore.

20 But now Christ is risen from the dead, the firstfruits of them that sleep:

21 For by a man came death, and by a man the resurrection of the dead.

22 And as in Adam all die, so also in Christ all shall be made alive.

23 But every one in his own order: the firstfruits Christ, then they that are of Christ, who have believed in his coming.

25 For he must reign, until he hath put all his enemies under his feet.

26 And the enemy death shall be destroyed last: For he hath put all things under his feet. And whereas he saith,

27 All things are put under him; undoubtedly, he is excepted, who put all things under him.

39 And Mary rising up in those days, went into the hill country with haste into a city of Juda.

40 And she entered into the house of Zachary, and saluted Elizabeth.

41 And it came to pass, that when Elizabeth heard the salutation of Mary, the infant leaped in her womb. And Elizabeth was filled with the Holy Ghost:

42 And she cried out with a loud voice, and said: Blessed art thou among women, and blessed is the fruit of thy womb.

43 And whence is this to me, that the mother of my Lord should come to me?

44 For behold as soon as the voice of thy salutation sounded in my ears, the infant in my womb leaped for joy.

45 And blessed art thou that hast believed, because those things shall be accomplished that were spoken to thee by the Lord.

46 And Mary said: My soul doth magnify the Lord.

47 And my spirit hath rejoiced in God my Saviour.

48 Because he hath regarded the humility of his handmaid; for behold from henceforth all generations shall call me blessed.

49 Because he that is mighty, hath done great things to me; and holy is his name.

50 And his mercy is from generation unto generations, to them that fear him.

51 He hath shewed might in his arm: he hath scattered the proud in the conceit of their heart.

52 He hath put down the mighty from their seat, and hath exalted the humble.

53 He hath filled the hungry with good things; and the rich he hath sent empty away.

54 He hath received Israel his servant, being mindful of his mercy:

55 As he spoke to our fathers, to Abraham and to his seed for ever.

56 And Mary abode with her about three months; and she returned to her own house.

The readings on this page are taken from the Douay-Rheims Catholic Bible. You can also read the Mass Readings taken from the New Jerusalem Bible, which is used at Mass in most of the English-speaking world. (References, Copyrights).
◄ August 14 August 16 ►
By Pradeep Augustine
Print
Facebook
WhatsApp
Twitter
Pinterest
Linkedin
Email
Telegram
LINE
Viber