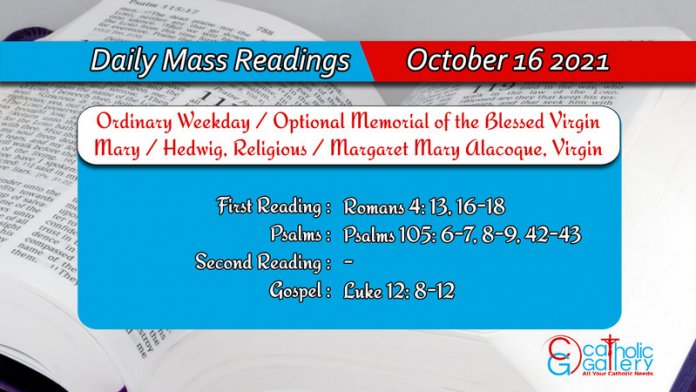 13 For not through the law was the promise to Abraham, or to his seed, that he should be heir of the world; but through the justice of faith.

16 Therefore is it of faith, that according to grace the promise might be firm to all the seed; not to that only which is of the law, but to that also which is of the faith of Abraham, who is the father of us all,

17 (As it is written: I have made thee a father of many nations,) before God, whom he believed, who quickeneth the dead; and calleth those things that are not, as those that are.

18 Who against hope believed in hope; that he might be made the father of many nations, according to that which was said to him: So shall thy seed be.

42 Because he remembered his holy word, which he had spoken to his servant Abraham.

43 And he brought forth his people with joy, and his chosen with gladness.

8 And I say to you, Whosoever shall confess me before men, him shall the Son of man also confess before the angels of God.

9 But he that shall deny me before men, shall be denied before the angels of God.

12 For the Holy Ghost shall teach you in the same hour what you must say.

The readings on this page are taken from the Douay-Rheims Catholic Bible. You can also read the Mass Readings taken from the New Jerusalem Bible, which is used at Mass in most of the English-speaking world. (References, Copyrights).
◄ October – 15 October – 17 ►
By Pradeep Augustine
Print
Facebook
WhatsApp
Twitter
Pinterest