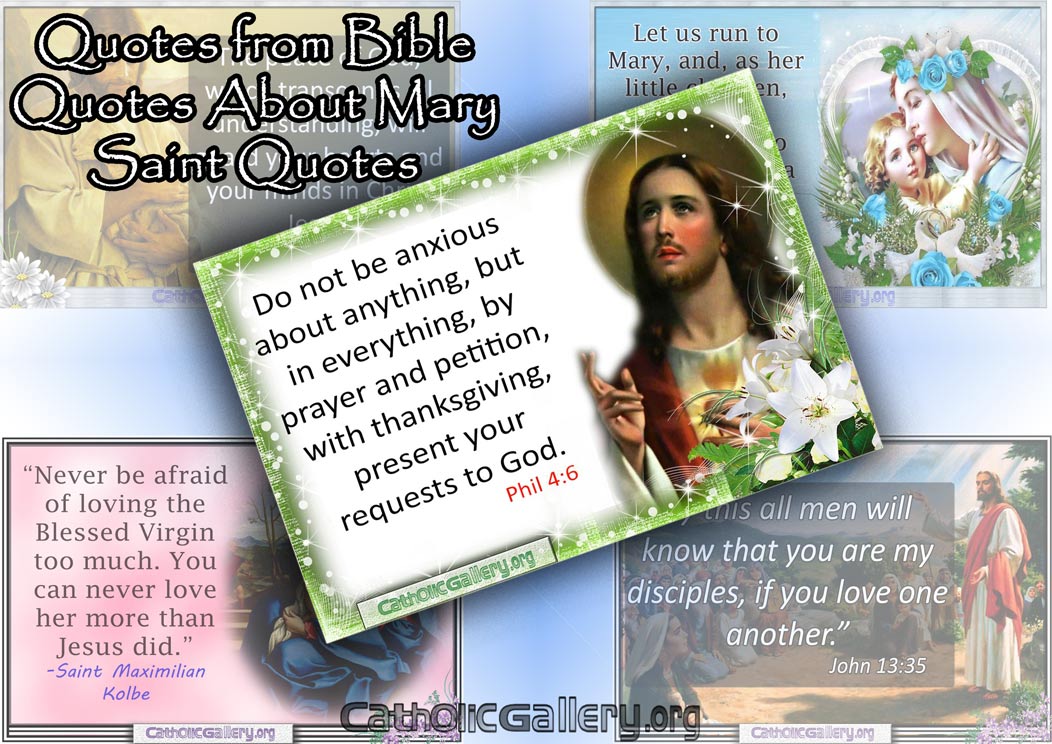 Tribulation is a gift from God; one that he especially gives His special friends.
-St. Thomas More

Comfort in tribulation can be secured only on the sure ground of faith holding as true the words of Scripture and the teaching of the Catholic Church.
-St. Thomas More

Without the burden of afflictions it is impossible to reach the height of grace. The gift of grace increases as the struggle increases.
-St. Rose of Lima

We must give alms. Charity wins souls and draws them to virtue.
-St. Angela Merici

There is no sin nor wrong that gives man such a foretaste of Hell in this life as anger and impatience.
-St. Catherine of Siena

Reprimand and rebuke should be accepted as healing remedies for vice and as conducive to good health. From this it is clear that those who pretend to be tolerant because they wish to flatter—–those who thus fail to correct sinners—–actually cause them to suffer supreme loss and plot the destruction of that life which is their true life.
-St. Basil the Great

The principal act of courage is to endure and withstand dangers doggedly rather than to attack them.
-St. Thomas Aquinas

Though the path is plain and smooth for men of good will, he who walks it will not travel far, and will do so only with difficulty, if he does not have good feet: that is, courage and a persevering spirit.
-St. John of the Cross

In everything, whether it is a thing sensed or a thing known, God Himself is hidden within.
-St. Bonaventure

You will accomplish more by kind words and a courteous manner than by anger or sharp rebuke, which should never be used except in necessity.
-St. Angela Merici

The rich man who gives to the poor does not bestow alms but pays a debt.
-St. Ambrose of Milan

He who walking on the sea could calm the bitter waves, who gives life to the dying seeds of the earth; he who was able to loose the mortal chains of death, and after three days’ darkness could bring again to the upper world the brother for his sister Martha: he, I believe, will make Damasus rise again from the dust.
-St. Damasus (from an epitaph written for himself)

“Charity may be a very short word, but with its tremendous meaning of pure love, it sums up man’s entire relation to God and to his neighbor.”
-St Aelred of Rievaulx

There is a holy anger, excited by zeal, that moves us to reprove with warmth those whom our mildness failed to correct.
-St. John Baptiste de la Salle

Men desire authority for its own sake that they may bear a rule, command and control other men, and live uncommanded and uncontrolled themselves.
-St. Thomas More

Nothing can be more dangerous than keeping wicked companions. They communicate the infection of their vices to all who associate with them.
-St. John Baptiste de la Salle

The recollection of an injury is . . . a rusty arrow and poison for the soul.
-St. Francis of Paola

It can only be disgraceful for some Christians to snore while other Christians are in peril.
-St. Thomas More

It is by the path of love, which is charity, that God draws near to man, and man to God. But where charity is not found, God cannot dwell. If, then, we possess charity, we possess God, for “God is Charity” (1John 4:8)
-St. Albert the Great

The school of Christ is the school of charity. On the last day, when the general examination takes place, there will be no question at all on the text of Aristotle, the aphorisms of Hippocrates, or the paragraphs of Justinian. Charity will be the whole syllabus.
-St. Robert Bellermine

Both the raven and the ape think their own young the fairest.
-St. Thomas More

Children should never be taken to church in dress that would not be thought good enough for appearing before company.
-St. John Baptiste de la Salle

The Church has always taught that all our penance without Christ’s passion is not worth a pea.
-St. Thomas More

If, then, you are looking for the way by which you should go, take Christ, because He Himself is the way.
-St. Thomas Aquinas

This Blood that but one drop of has the power to win All the world forgiveness of its world of sin.
-St. Thomas Aquinas

It would be considered a theft on our part if we didn’t give to someone in greater need than we are.
-St. Francis of Assisi

The only true riches are those that make us rich in virtue. Therefore, if you want to be rich, beloved, love true riches. If you aspire to the heights of real honor, strive to reach the kingdom of Heaven. If you value rank and renown, hasten to be enrolled in the heavenly court of the Angels.
-Pope St. Gregory the Great

What should I give up for Lent?