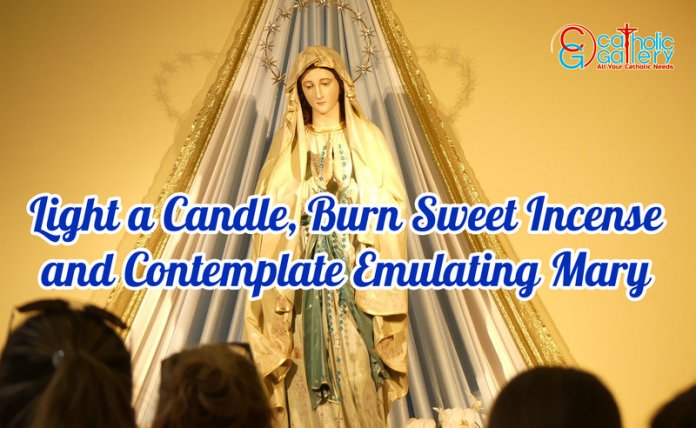 “Let, then, the life of Mary be as it were virginity itself, set forth in a likeness, from which, as from a mirror, the appearance of chastity and the form of virtue is reflected. From this you may take your pattern of life, showing, as an example, the clear rules of virtue: what you have to correct, to effect, and to hold fast. The first thing which kindles ardour in learning is the greatness of the teacher. What is greater than the Mother of God?”

Mary is Overshadowed by the Light of an Angel

Envision the scene; an innocent child, just thirteen years old, is alone in her room. She is in prayer when suddenly a brilliant light overshadows the space, startling her.

In Scripture (Luke 1: 26-38), Saint Luke tells us that the angel Gabriel was sent from God to Nazareth, to a virgin betrothed to a man whose name was Joseph; and the virgin’s name was Mary. And he came in unto her, and said, “Hail, thou that art highly favored, the Lord is with thee.” But she was greatly troubled at the saying, and cast in her mind what manner of salutation this might be. The angel said to her, “Fear not, Mary: for thou hast found favor with God. And behold, thou shalt conceive in thy womb, and bring forth a son, and shalt call his name Jesus. He shall be great, and shall be called the Son of the Most High: and the Lord God shall give unto him the throne of his father David: and he shall reign over the house of Jacob forever; and of his kingdom there shall be no end.” And Mary said unto the angel, “How shall this be, seeing I know not a man?” And the angel answered and said unto her, “The Holy Spirit shall come upon thee, and the power of the Most High shall overshadow thee: wherefore also the holy thing which is begotten shall be called the Son of God. And behold, Elisabeth thy kinswoman, she also hath conceived a son in her old age; and this is the sixth month with her that was called barren. For no word from God shall be void of power.” And Mary said, “Behold, the handmaid of the Lord; be it unto me according to thy word.” And the angel departed from her.

A frightened thirteen-year-old child whose faith was so strong and love for God so great that she accepted what she was told and willingly answered, “…be it unto me according to thy word.” Obedience. Saint Thomas Aquinas wrote, “Obedience unites us so closely to God that in a way, it transforms us into Him, so that we have no other will but His. If obedience is lacking, even prayer cannot be pleasing to God.” Mary knew neither the joys nor the sufferings that were to come. She knew only what the angel, Gabriel, had told her yet she trusted and obeyed. From the innocence of this magnificent child, we are taught obedience. In this, we ponder our own obedience. Do we listen? Do we live according to the laws we were given? Are we willing to follow God’s will for us even when His will may not be ours?

Mary’s Faith; A Candle to Help Guide Our Way

Saint Luke goes on to tell us (Luke 1: 39-45) that Mary arose and went in a hurry to a city of Judah, and entered the house of Zacharias and greeted Elizabeth. Elizabeth said, “……And blessed is she who believed that there would be a fulfillment of what had been spoken to her by the Lord.” “She who believed.” Faith. Mary believed. She didn’t question. She believed. Mary exemplifies faith. Saint Bernard said, “I believe though I do not comprehend, and I hold by faith what I cannot grasp with the mind.” Do we ever consider the depth of our own faith? Do we doubt? Do we question? Do we trust enough? Faith comes easily when times are good but how deeply do we hold onto faith when we are facing hardship and challenges?

In her Magnificat (Luke 1:46-55), Mary said, “My soul exalts the Lord. And my spirit has rejoiced in God my Savior. For He has had regard for the humble state of His bondslave……. He has done mighty deeds with His arm. He has scattered those who were proud in the thoughts of their heart. He has brought down rulers from their thrones, and has exalted those who were humble….” In her diary, Saint Faustina wrote that Jesus told her, “The greatest misery does not stop Me from uniting Myself to a soul, but where there is pride, I am not there.” Saint Raphael Kalinowski said, ‘God refuses only the person who does not admit his own weakness; He sends away only the unhappy proud person. You must “hold him” well and strongly, with a poor spirit, with a poor heart, with a life entirely poor…” Humility. Mary did not know pride. She was, in fact, the personification of humility. We often become caught up in pride; neither recognizing nor accepting that all that we have has been given to us by the Grace of God. Pride is one of the Seven Deadly Sins and is considered to be at the root of all sin. Mary teaches us there is no place for pride if we want to please God.

A Chalice of Charity, A Lesson in Selflessness

And Mary stayed with her about three months, and then returned to her home (Luke 1: 56). Young and pregnant, Mary stayed with her cousin for about three months. Why did she stay for such a length of time? Considering what we have learned about her up to this point, we can assume that she was helping her aged cousin. Remembering that Elizabeth’s husband, Zacharias, had no voice (Luke 1: 18-20), we can understand those daily routines may have become difficult for an aged pregnant woman. Mary, undoubtedly cared for Elizabeth by assisting with chores and helping in other ways. Charity. Mary embodies charity. Of course, she would. We would expect nothing less from the mother of Our Lord. Are we charitable? Do we know the Corporal Acts of Mercy (Feed the hungry, Shelter the homeless, Clothe the naked, Visit the sick, Visit the imprisoned, Bury the dead and Give alms to the poor)? Do we practice any of these acts? Are we willing to take from our time and resources to give and do for others? Charity is another lesson Our Lady teaches us.

The Rosary, a Sacred Strand of Twenty Lessons

Fast forward to the Wedding at Cana (John 2: 1-5), a passage Saint John Paul II felt was so important that he included it in the Luminous Mysteries of the rosary. On the third day there was a wedding in Cana of Galilee, and the mother of Jesus was there; and both Jesus and His disciples were invited to the wedding. When the wine ran out, the mother of Jesus said to Him, “They have no wine.” And Jesus said to her, “Woman, what does that have to do with us? My hour has not yet come.” His mother said to the servants, “Whatever He says to you, do it.” I believe this passage is one where we learn much about Mary. Here, we see many of her virtues. Mary may not have known exactly what events were to come once her Son had begun “His time” but she knew there would be suffering and heartache. The prophecy of Simeon (Luke 1: 33), “…..And a sword will pierce your very soul,” was repeated in her mind a thousand times. Once He performed this, His first miracle, there was no turning back. In her heart, Mary knew this yet she, in a sense, threw Him to the wolves. Divine wisdom. Mary was in constant prayer and in her prayer, she was ever begging for God’s Spirit to guide her. She held on to His guidance and in her wisdom, did what she knew had to be done. She was willing to lay down her own happiness and her will, to obey God. Here, she teaches us Universal Mortification. Divine wisdom, constant prayer and a willingness to sacrifice her own wellbeing if it be the will of God. These are difficult lessons but they are virtues much needed in the world. Without constant prayer, we would never be able to follow in Our Lady’s footsteps but with constant prayer, all things are possible.

Let us ever remember John 19:27, where Jesus said to John, “Behold your mother!” Here He was giving His mother to us. At that point in time, Mary became our mother for eternity. As our mother, she loves us, guides us, protects us and most importantly, she intercedes for us. As her children, we must learn from her, taking each of her virtues and working to follow her. We do this knowing that she takes no glory for herself. Her goal is to bring us closer to her Son and ultimately, this is our goal. A friend once said to me, “This world needs more Mary energy.” This is so true. This world needs more humility, obedience, charity, gentleness, and deeper faith. How do we accomplish this? We accomplish this with prayer; constant prayer. Living each moment prayerfully. So as you sit in quietude with a lighted candle to encourage reflection praying your rosary. Envision each mystery from Mary’s heart and ask for help in becoming more like her. This world needs more Mary energy (Also read 15 Promises of Mary to the Christians who recite the Rosary).

“In dangers, in doubts, in difficulties, think of Mary, call upon Mary. Let not her name depart from your lips, never suffer it to leave your heart. And that you may obtain the assistance of her prayer, neglect not to walk in her footsteps. With her for guide, you shall never go astray; while invoking her, you shall never lose heart; so long as she is in your mind, you are safe from deception; while she holds your hand, you cannot fall; under her protection you have nothing to fear; if she walks before you, you shall not grow weary; if she shows you favor, you shall reach the goal.”

Other People are Reading 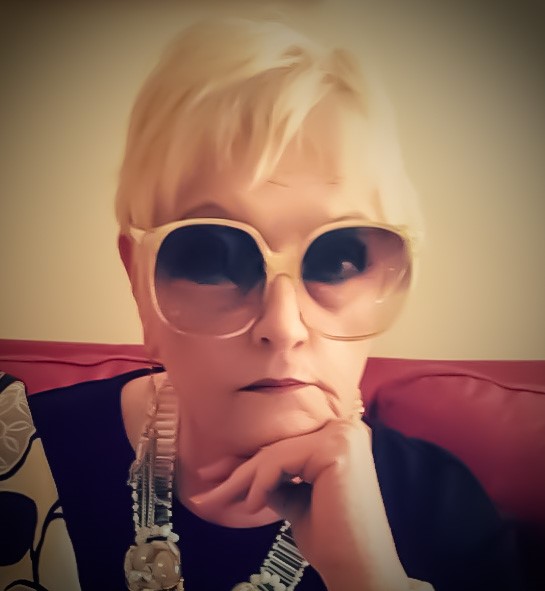 Marilyn Nashhttp://www.gardenias4lina.com/
Marilyn Nash is a rosary artisan, artist, author and designer of one-of-a-kind jewelry and wearable art. Author of the book ~ The Sacred Strand, Praying the Rosary with Saints and Artists. She is certified is Religious Education (Providence College, USA) and has taught both children and adults, specializing in Catholic themes and doctrine related to Mary and the Rosary. Also a lector and Extraordinary Minister of Holy Communion, her passion is painting sacred and spiritual art.

As good Friday stares at us, no doubt, Easter is here. It is an exciting holy moment for Christians around the world...
Read more
Article

It’s fairly common to hear people describing what they’re “giving up for Lent” each year, but many of the details about Lent...
Read more
Article

How to take the next steps into Catholic Adulthood?