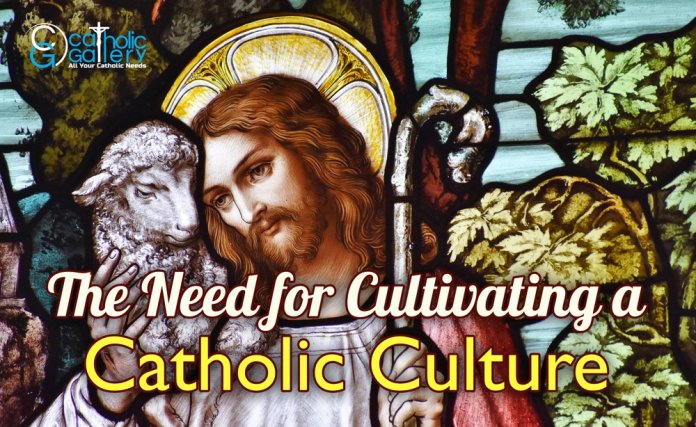 Ours is a world over which technology and pop culture are constantly swaying dominance, especially in society. The concrete jungle, being built ever higher and more expansive, allows the bombardment of media and entertainment to reach us with ease. Like any endeavor of technology, this cultural saturation brings with it both the good and the bad. In this changing media landscape, how is the Catholic to partake in and engage with this culture?

The linguistic background of our English term culture is rooted in the concept of cult-ivation, a notion of nurturing or growing, a sense of agricultural pursuits which, when properly exercised, are meant to bear fruit.

The significance of this philological association of agriculture and our modern-day understanding of popular culture can be seen in examining the earliest story found in Sacred Scripture. Genesis 2:15 reads, “The Lord God then took the man and settled him in the garden of Eden, to cultivate and care for it.” Note that this instance is prior to the Fall of Adam and Eve, that the fundamental aspect of work is part of God’s divine plan for human existence. But it also is not just any kind of labor; it doesn’t consist of building an arc or a temple. This first calling of humanity to physical labor is literally found in agriculture.

The verses contained in Scripture are known to often display multiple dimensions of communication. The biblical writings may be delivered in different genres as varying as any other form of literature and include the genres of history, narrative, prophecy, and poetry. (Though, unlike other books, the Bible must be always held in the highest spiritual regard as the logos, the Word of God.) The logos as laid down in Genesis is firstly the historical relation of man’s earliest encounters with his Creator, but the passage quoted might also be conveying another message if we take the garden and the act of cultivation to be metaphorical symbols. If so, the garden would be seen as a type to culture and cultivation, a type to reforming, criticizing, and commenting on that culture.

Our culture stems from nature and the happenings of society in all its advancing fields. As Adam and Eve were put in charge of Eden, so Catholics have an obligation to the culture in which they live. The chief task at hand, whether in gardening or intending to the culture, is to be observant and then react. If there are weeds grouping around the vegetables that were planted and hindering their development, the weeds need to be removed for the betterment of the garden.

Similarly, if there are ethical problems in our culture, they need to be addressed, shown to be immoral, rooted out. Anyone who has spent time weeding knows not all weeds are going to come out without a fight. Just as the gardener is attentive to the growth of his crop and the whereabouts of any weeds, so must Catholics be alert in confronting the evils of their time. This means more than merely being conscious of the wrongs throughout the world. It entails speaking out against them whenever one can, praying that evil may be overcome and taking other action as is fitting to the individual circumstances.

Sensational sex, drugs for pleasure, euthanasia: all severe sins which get glamorized by popular culture. They are depicted as liberating and gratifying acts. If Catholics do not show visible disgust for such sins and discuss how they are harmful to society, we are letting evil simply roll off our backs unabated and unhindered. We are figuratively leaving the gates of the city wide open to attack, and we run the risk of merging wholeheartedly with the popular and mass culture in all the wrong ways – those ways which harm our conscience and our moral standards. When you tackle a loss or have experienced shock, culture points to drugs and alcohol as remedies. Premarital sex is a step away from rape. What is the difference between aborting an infant at nine months and killing a three-year-old child? These are the moral dilemmas staring us in the face in the 21st century.

One of the first helpful measures to work toward is a Catholic commentary and criticism of pop culture. When you’re watching a movie or TV show which depicts graphic nudity, just pornography placed in a revised medium, you are likely being called to turn it off. Don’t subject your eyes, the windows to the soul, to something which ends in emptiness. When premarital sex is being shown in a positive setting, make a point to discuss its immorality with anyone else who may be watching.

Even with instances such as these found throughout works of popular culture, everything is not gloomy and utterly dreary. The commentary goes both ways. As many times as there are negative attributes to be found in pop culture, there are also times that certain artists and their works call for resounding approval and support. When a movie depicts a strong character (based on Christian morals) who must confront his own shortcomings as well as conquer evil elsewhere, the cinematic storytellers deserve their applause.

Catholics are called to employ their talents and monetary capabilities to fashion the culture for the common good as well. Catholic writers, artists, directors, and actors are called to bring Christ and the Gospel into their work. True, all Catholics are meant to do this at their place of employment and wherever they are. But a creative has, in theory, a greater potential for influencing the masses with the way they deliver their message.

Modern art, film, and literature often need to present the message of Christ in a nuanced, refreshing, and attractive way through symbolism and ethics. The culture needs to be cultivated – like a garden or a field.

Some of our Lord’s deepest, most effective parables employ agricultural symbolism. (And it makes perfect sense seeing as how so many of the common people of Jesus’s time were farmers or cultivators.) In addition to this, another call to action might be found in a brief comment Jesus makes to His disciples. “At the sight of the crowds, his heart was moved with pity for them because they were troubled and abandoned, like sheep without a shepherd. Then he said to his disciples, ‘The harvest is abundant but the laborers are few; so ask the master of the harvest to send out laborers for his harvest’” (Matthew 9:36-38).

Classically, the passage is represented as a call to the religious life, especially the priesthood. But it could also be pointing to the need for Catholics to cultivate a rich and truth-filled culture that bears good fruit. We are called to participate and contribute to that culture. Some of the popes have gone so far as to make this same point. Pope St. John Paul II said, “The search for the true, the beautiful, and the good is not a pragmatic exercise, but rather a cultural and ethical one. It is a service to human development and a way for evangelization.” Elsewhere, the saint notes, “The Christian Faith does not destroy culture but purifies and uplifts it. It takes away nothing of genuine value from a society or nation.”

This active participation and criticism of the culture, this building upon truth and beauty, is vital to the survival of the Catholic faith. Why? One of God’s commands back in Genesis provides the answer. “God also said: See, I give you every seed-bearing plant on all the earth and every tree that has seed-bearing fruit on it to be your food” (Genesis 1:29). We reap what we sow, and we are what we eat. A bit oversimplified. Nevertheless, it’s true. Whether we thoroughly engage with the culture or not, we are still part of it. We can not be separated from it. We are consumers of culture. No matter what, the culture we live in, whatever it be, has an effect on us. If ours is not a truth-based culture, then we are doomed to fall victim to its “bad fruit,” its malicious influences. Thus, Catholics need to be builders of the culture.

Another important way of interacting with the culture is showing your support (often financially) in favor of or against certain endeavors. If enough of the Catholic population were willing to do this, they would be able to change the culture bit by bit. Again, God’s command from the beginning goes beyond merely telling Adam and Eve to eat of the fruit of the garden. There is a rare restriction set in place. “The Lord God gave the man this order: You are free to eat from any of the trees of the garden except the tree of knowledge of good and evil. From that tree you shall not eat; when you eat from it you shall die” (Genesis 2:16-17).

When it comes to the types of media which we can decide to experience or not, there are those which are permissible and those which should be avoided. If a TV show depicts hatred coupled with revenge in a positive, approving way, then it should not be the entertainment which is occupying the attention of impressionable youth. If there is an exhibit of fine art photography, but you know several of the portraits are graphic nudes, should you be going to the exhibit? Is attending the live music performance with the dancers displaying cleavage worth it? Sometimes you should not see the movie, even though you want to, because of its content or theme. The scenarios are too real to ignore, and there are decisions regarding them being made frequently.

As a Catholic, if you have knowledge that a company or individual is a blatant supporter of a deadly vice, the question as to whether it is moral to give them monetary support should be asked. For instance, do you support the store or the filmmaker who wholeheartedly promotes abortion? The Catholic society needs to remain part of the world’s society: learned, engaged, and, when necessary, critical. We need to ask, “Does this help the culture grow meaningfully and closer to Christ?”

The culture requires both prayer and action for healing. With God guiding us, we are called to be bearers of the Word to the world, changing the culture of death into one of life.

736,796FansLike
101FollowersFollow
56SubscribersSubscribe
Free Email Updates
Get the Daily Mass Readings, Prayers and Quotes right from your inbox for free.
Give it a try, you can unsubscribe anytime.