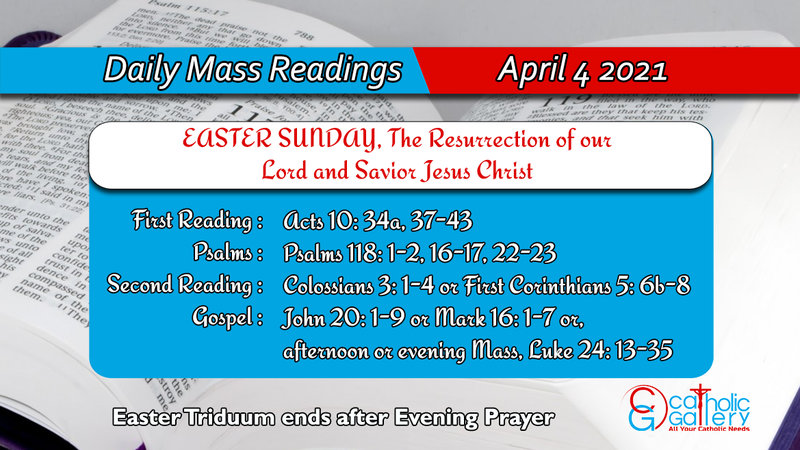 1 And when the sabbath was past, Mary Magdalen, and Mary the mother of James, and Salome, bought sweet spices, that coming, they might anoint Jesus.

2 And very early in the morning, the first day of the week, they come to the sepulchre, the sun being now risen.

3 And they said one to another: Who shall roll us back the stone from the door of the sepulchre?

4 And looking, they saw the stone rolled back. For it was very great.

5 And entering into the sepulchre, they saw a young man sitting on the right side, clothed with a white robe: and they were astonished.

6 Who saith to them: Be not affrighted; you seek Jesus of Nazareth, who was crucified: he is risen, he is not here, behold the place where they laid him.

7 But go, tell his disciples and Peter that he goeth before you into Galilee; there you shall see him, as he told you.

At an afternoon or evening Mass

The readings on this page are taken from the Douay-Rheims Catholic Bible. You can also read the Mass Readings taken from the New Jerusalem Bible, which is used at Mass in most of the English-speaking world. (References, Copyrights).
◄ April – 3April – 5 ►
ByPradeep Augustine
Print
Facebook
WhatsApp
Twitter
Pinterest
Linkedin
Email
Telegram
LINE
Viber