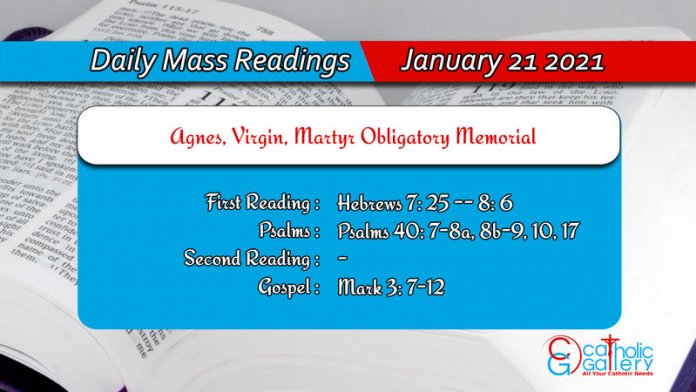 25 Whereby he is able also to save for ever them that come to God by him; always living to make intercession for us.

26 For it was fitting that we should have such a high priest, holy, innocent, undefiled, separated from sinners, and made higher than the heavens;

27 Who needeth not daily (as the other priests) to offer sacrifices first for his own sins, and then for the people’s: for this he did once, in offering himself.

28 For the law maketh men priests, who have infirmity: but the word of the oath, which was since the law, the Son who is perfected for evermore.

8:1 Now of the things which we have spoken, this is the sum: We have such an high priest, who is set on the right hand of the throne of majesty in the heavens,

2 A minister of the holies, and of the true tabernacle, which the Lord hath pitched, and not man.

3 For every high priest is appointed to offer gifts and sacrifices: wherefore it is necessary that he also should have some thing to offer.

4 If then he were on earth, he would not be a priest: seeing that there would be others to offer gifts according to the law,

5 Who serve unto the example and shadow of heavenly things. As it was answered to Moses, when he was to finish the tabernacle: See (saith he) that thou make all things according to the pattern which was shewn thee on the mount.

6 But now he hath obtained a better ministry, by how much also he is a mediator of a better testament, which is established on better promises.

17 Let all that seek thee rejoice and be glad in thee: and let such as love thy salvation say always: The Lord be magnified.

7 But Jesus retired with his disciples to the sea; and a great multitude followed him from Galilee and Judea,

8 And from Jerusalem, and from Idumea, and from beyond the Jordan. And they about Tyre and Sidon, a great multitude, hearing the things which he did, came to him.

9 And he spoke to his disciples that a small ship should wait on him because of the multitude, lest they should throng him.

10 For he healed many, so that they pressed upon him for to touch him, as many as had evils.

11 And the unclean spirits, when they saw him, fell down before him: and they cried, saying:

12 Thou art the Son of God. And he strictly charged them that they should not make him known.

The readings on this page are taken from the Douay-Rheims Catholic Bible. You can also read the Mass Readings taken from the New Jerusalem Bible, which is used at Mass in most of the English-speaking world. (References, Copyrights).
◄ January – 20 January – 22 ►
By Pradeep Augustine
Print
Facebook
WhatsApp
Twitter
Pinterest
Linkedin
Email
Telegram
LINE
Viber