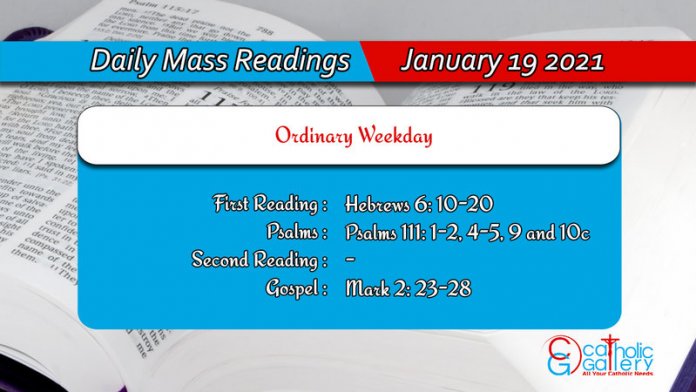 10 For God is not unjust, that he should forget your work, and the love which you have shewn in his name, you who have ministered, and do minister to the saints.

11 And we desire that every one of you shew forth the same carefulness to the accomplishing of hope unto the end:

12 That you become not slothful, but followers of them, who through faith and patience shall inherit the promises.

13 For God making promise to Abraham, because he had no one greater by whom he might swear, swore by himself,

14 Saying: Unless blessing I shall bless thee, and multiplying I shall multiply thee.

15 And so patiently enduring he obtained the promise.

16 For men swear by one greater than themselves: and an oath for confirmation is the end of all their controversy.

17 Wherein God, meaning more abundantly to shew to the heirs of the promise the immutability of his counsel, interposed an oath:

18 That by two immutable things, in which it is impossible for God to lie, we may have the strongest comfort, who have fled for refuge to hold fast the hope set before us.

19 Which we have as an anchor of the soul, sure and firm, and which entereth in even within the veil;

20 Where the forerunner Jesus is entered for us, made a high priest for ever according to the order of Melchisedech.

1 I will praise thee, O Lord, with my whole heart; in the council of the just: and in the congregation.

2 Great are the works of the Lord: sought out according to all his wills.

4 He hath made a remembrance of his wonderful works, being a merciful and gracious Lord:

5 He hath given food to them that fear him. He will be mindful for ever of his covenant:

9 He hath sent redemption to his people: he hath commanded his covenant for ever. Holy and terrible is his name:

10 The fear of the Lord is the beginning of wisdom. A good understanding to all that do it: his praise continueth for ever and ever.

23 And it came to pass again, as the Lord walked through the corn fields on the sabbath, that his disciples began to go forward, and to pluck the ears of corn.

24 And the Pharisees said to him: Behold, why do they on the sabbath day that which is not lawful?

25 And he said to them: Have you never read what David did when he had need, and was hungry himself, and they that were with him?

26 How he went into the house of God, under Abiathar the high priest, and did eat the loaves of proposition, which was not lawful to eat but for the priests, and gave to them who were with him?

27 And he said to them: The sabbath was made for man, and not man for the sabbath.

28 Therefore the Son of man is Lord of the sabbath also.

The readings on this page are taken from the Douay-Rheims Catholic Bible. You can also read the Mass Readings taken from the New Jerusalem Bible, which is used at Mass in most of the English-speaking world. (References, Copyrights)
◄ January – 18 January – 20 ►