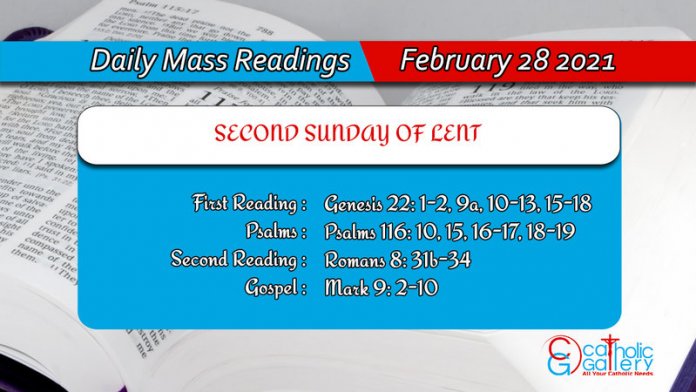 1 After these things, God tempted Abraham, and said to him: Abraham, Abraham. And he answered: Here I am.

2 He said to him: Take thy only begotten son Isaac, whom thou lovest, and go into the land of vision: and there thou shalt offer him for an holocaust upon one of the mountains which I will shew thee.

9 And they came to the place which God had shewn him, where he built an altar, and laid the wood in order upon it: and when he had bound Isaac his son, he laid him on the altar upon the pile of wood.

10 And he put forth his hand and took the sword, to sacrifice his son.

11 And behold an angel of the Lord from heaven called to him, saying: Abraham, Abraham. And he answered: Here I am.

12 And he said to him: Lay not thy hand upon the boy, neither do thou any thing to him: now I know that thou fearest God, and hast not spared thy only begotten son for my sake.

13 Abraham lifted up his eyes, and saw behind his back a ram amongst the briers sticking fast by the horns, which he took and offered for a holocaust instead of his son.

15 And the angel of the Lord called to Abraham a second time from heaven, saying:

16 By my own self have I sworn, saith the Lord: because thou hast done this thing, and hast not spared thy only begotten son for my sake:

17 I will bless thee, and I will multiply thy seed as the stars of heaven, and as the sand that is by the sea shore: thy seed shall possess the gates of their enemies.

18 And in thy seed shall all the nations of the earth be blessed, because thou hast obeyed my voice.

10 I have believed, therefore have I spoken; but I have been humbled exceedingly.

15 Precious in the sight of the Lord is the death of his saints.

17 I will sacrifice to thee the sacrifice of praise, and I will call upon the name of the Lord.

18 I will pay my vows to the Lord in the sight of all his people:

19 In the courts of the house of the Lord, in the midst of thee, O Jerusalem.

31 What shall we then say to these things? If God be for us, who is against us?

32 He that spared not even his own Son, but delivered him up for us all, how hath he not also, with him, given us all things?

33 Who shall accuse against the elect of God? God that justifieth.

34 Who is he that shall condemn? Christ Jesus that died, yea that is risen also again; who is at the right hand of God, who also maketh intercession for us.

2 And after six days Jesus taketh with him Peter and James and John, and leadeth them up into an high mountain apart by themselves, and was transfigured before them.

3 And his garments became shining and exceeding white as snow, so as no fuller upon earth can make white.

4 And there appeared to them Elias with Moses; and they were talking with Jesus.

5 And Peter answering, said to Jesus: Rabbi, it is good for us to be here: and let us make three tabernacles, one for thee, and one for Moses, and one for Elias.

6 For he knew not what he said: for they were struck with fear.

7 And there was a cloud overshadowing them: and a voice came out of the cloud, saying: This is my most beloved son; hear ye him.

8 And immediately looking about, they saw no man any more, but Jesus only with them.

9 And as they came down from the mountain, he charged them not to tell any man what things they had seen, till the Son of man shall be risen again from the dead.

10 And they kept the word to themselves; questioning together what that should mean, when he shall be risen from the dead.

The readings on this page are taken from the Douay-Rheims Catholic Bible. You can also read the Mass Readings taken from the New Jerusalem Bible, which is used at Mass in most of the English-speaking world. (References, Copyrights).
◄ February – 27 March – 1 ►
By Pradeep Augustine
Print
Facebook
WhatsApp
Twitter
Pinterest
Linkedin
Email
Telegram
LINE
Viber