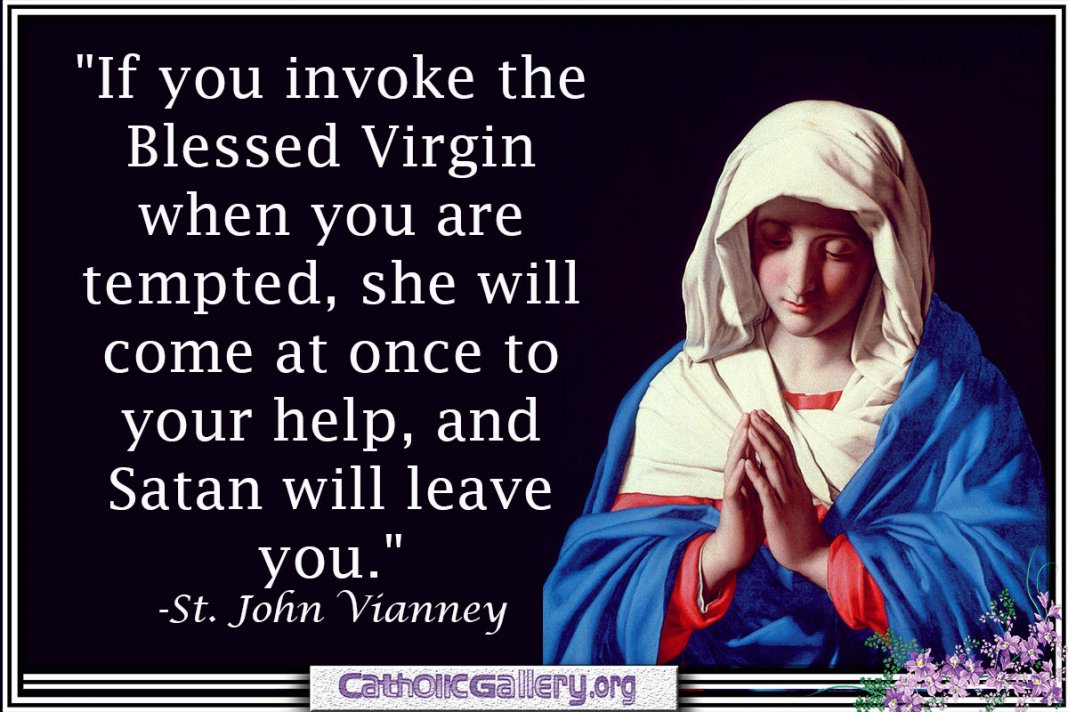 ”The conflict with Hell cannot be maintained by men, even the most clever. The Immaculata alone has from God the promise of victory over Satan.”
-Saint Maximilian Mary Kolbe, Martyr

”Jesus honored her before all ages, and will honor her for all ages. No one comes to Him, nor even near Him, no one is saved or sanctified, if he too will not honor her. This is the lot of Angels and of men.”
-Saint Maximilian Mary Kolbe, Martyr

“If anyone does not wish to have Mary Immaculate for his Mother, he will not have Christ for his Brother.”
-Saint Maximilian Kolbe, Martyr, 1894-1941 AD

“Always stay close to this Heavenly Mother, because she is the sea to be crossed to reach the shores of Eternal Splendour.”
-Saint Padre Pio, 1887-1968 AD

“In trial or difficulty I have recourse to Mother Mary, whose glance alone is enough to dissipate every fear.”
-Saint Therese of Lisieux

“Mary seeks for those who approach her devoutly and with reverence, for such she loves, nourishes, and adopts as her children.”
-Saint Bonaventure, Doctor of the Church

“What a joy to remember that she [Mary] is our Mother! Since she loves us and knows our weakness, what have we to fear?”
-Saint Therese of Lisieux

“The clients of this most merciful Mother are very fortunate. She helps them both in this life and in the next, consoling them and sponsoring their cause in Purgatory. For the simple reason that the Souls in Purgatory need help so desperately, since they cannot help themselves, our Mother of Mercy does so much more to relieve them. She exercises over these Poor Souls, who are the spouses of Christ, particular dominion, with power to relieve them and even deliver them from their pains. See how important it is then to have devotion to this good Lady, because she never forgets her servants as long as they suffer in these flames. If she helps all the Poor Souls, she is especially indulgent and consoling to her own clients.”
-Saint Alphonsus Liguori, Doctor of the Church, The Glories of Mary

“You are My Mother, the Mother of Mercy, and the consolation of the souls in Purgatory.”
-Saint Bridget to our Lady

“Mary has the authority over the angels and the blessed in heaven. As a reward for her great humility, God gave her the power and mission of assigning to saints the thrones made vacant by the apostate angels who fell away through pride. Such is the will of the almighty God who exalts the humble, that the powers of heaven, earth and hell, willingly or unwillingly, must obey the commands of the humble Virgin Mary. For God has made her queen of heaven and earth, leader of his armies, keeper of his treasure, dispenser of his graces, mediatrix on behalf of men, destroyer of his enemies, and faithful associate in his great works and triumphs.”
-Saint Louis Marie de Montfort, True Devotion to the Blessed Virgin

“If anyone does not wish to have Mary Immaculate for his Mother, he will not have Christ for his Brother.”
-Saint Maximilian Kolbe

“Let us not imagine that we obscure the glory of the Son by the great praise we lavish on the Mother; for the more she is honored, the greater is the glory of her Son. There can be no doubt that whatever we say in praise of the Mother gives equal praise to the Son.”
-Saint Bernard of Clairvaux, Father and Doctor of the Church

“No matter how sinful one may have been, if he has devotion to Mary, it is impossible that he be lost.”
-Saint Hilary of Poitiers – Bishop, Father, and Doctor of the Church

“Seek refuge in Mary because she is the city of refuge. We know that Moses set up three cities of refuge for anyone who inadvertently killed his neighbor. Now the Lord has established a refuge of mercy, Mary, even for those who deliberately commit evil. Mary provides shelter and strength for the sinner.”
-Saint Anthony of Padua, Doctor of the Church

“If anyone does not believe that Holy Mary is the Mother of God, such a one is a stranger to the Godhead.”
-Saint Gregory Nazianzen, Father and Doctor of the Church

“Prayer is powerful beyond limits when we turn to the Immaculata who is queen even of God’s heart.”
-Saint Maximilian Kolbe

“She is more Mother than Queen.”
-Saint Therese of Lisieux, Doctor of the Church

“In that first ‘fusion’ with Jesus (holy communion), it was my Heavenly Mother again who accompanied me to the altar for it was she herself who placed her Jesus into my soul.”
-Saint Therese of Lisieux, Doctor of the Church

“In trial or difficulty I have recourse to Mother Mary, whose glance alone is enough to dissipate every fear.”
-Saint Therese of Lisieux, Doctor of the Church

“Think of what the Saints have done for their neighbor because they loved God. But what Saint’s love for God can match Mary’s? She loved Him more in the first moment of her existence than all the Saints and angels ever loved Him or will love Him. Our Lady herself revealed to Sister Mary Crucified that the fire of her love was most extreme. If Heaven and earth were placed in it, they would be instantly consumed. And the ardors of the seraphim, compared with it, are like cool breezes. Just as there is not one among all the Blessed who loves God as Mary does, so there is no one, after God, who loves us as much as this most loving Mother does. Furthermore, if we heaped together all the love that mothers have for their children, all the love of husbands and wives, all the love of all the angels and Saints for their clients, it could never equal Mary’s love for even a single soul.”
-Saint Alphonsus Liguori, The Glories of Mary

“Do not marvel at the novelty of the thing, if a Virgin gives birth to God”
-Saint Jerome, Father and Doctor of the Church

“As mariners are guided into port by the shining of a star, so Christians are guided to heaven by Mary”
-Saint Thomas Aquinas, Doctor of the Church

“Even while living in the world, the heart of Mary was so filled with motherly tenderness and compassion for men that no-one ever suffered so much for their own pains, as Mary suffered for the pains of her children.”
-Saint Jerome, Father and Doctor of the Church

“The world being unworthy to receive the Son of God directly from the hands of the Father, he gave his Son to Mary for the world to receive him from her.”
-Saint Augustine, Father and Doctor of the Church

What should I give up for Lent?