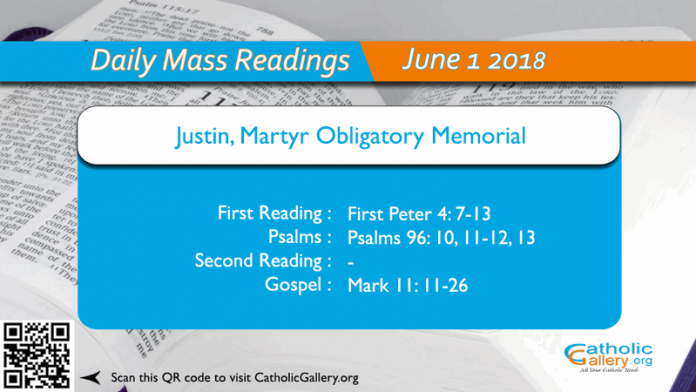 7 But the end of all is at hand. Be prudent therefore, and watch in prayers.

8 But before all things have a constant mutual charity among yourselves: for charity covereth a multitude of sins.

9 Using hospitality one towards another, without murmuring,

10 As every man hath received grace, ministering the same one to another: as good stewards of the manifold grace of God.

11 If any man speak, let him speak, as the words of God. If any man minister, let him do it, as of the power, which God administereth: that in all things God may be honoured through Jesus Christ: to whom is glory and empire for ever and ever. Amen.

12 Dearly beloved, think not strange the burning heat which is to try you, as if some new thing happened to you;

13 But if you partake of the sufferings of Christ, rejoice that when his glory shall be revealed, you may also be glad with exceeding joy.

10 Say ye among the Gentiles, the Lord hath reigned. For he hath corrected the world, which shall not be moved: he will judge the people with justice.

11 Let the heavens rejoice, and let the earth be glad, let the sea be moved, and the fulness thereof:

12 The fields and all things that are in them shall be joyful. Then shall all the trees of the woods rejoice

11 And he entered into Jerusalem, into the temple: and having viewed all things round about, when now the eventide was come, he went out to Bethania with the twelve.

12 And the next day when they came out from Bethania, he was hungry.

13 And when he had seen afar off a fig tree having leaves, he came if perhaps he might find any thing on it. And when he was come to it, he found nothing but leaves. For it was not the time for figs.

14 And answering he said to it: May no man hereafter eat fruit of thee any more for ever. And his disciples heard it.

16 And he suffered not that any man should carry a vessel through the temple;

17 And he taught, saying to them: Is it not written, My house shall be called the house of prayer to all nations? But you have made it a den of thieves.

18 Which when the chief priests and the scribes had heard, they sought how they might destroy him. For they feared him, because the whole multitude was in admiration at his doctrine.

19 And when evening was come, he went forth out of the city.

20 And when they passed by in the morning they saw the fig tree dried up from the roots.

21 And Peter remembering, said to him: Rabbi, behold the fig tree, which thou didst curse, is withered away.

22 And Jesus answering, saith to them: Have the faith of God.

23 Amen I say to you, that whosoever shall say to this mountain, Be thou removed and be cast into the sea, and shall not stagger in his heart, but believe, that whatsoever he saith shall be done; it shall be done unto him.

24 Therefore I say unto you, all things, whatsoever you ask when ye pray, believe that you shall receive; and they shall come unto you.

25 And when you shall stand to pray, forgive, if you have aught against any man; that your Father also, who is in heaven, may forgive you your sins.

26 But if you will not forgive, neither will your Father that is in heaven, forgive you your sins.

The readings on this page are taken from the Douay-Rheims Catholic Bible. You can also read the Mass Readings taken from the New Jerusalem Bible, which is used at Mass in most of the English-speaking world. (References, Copyrights).
◄ May 31 June 2 ►
By Pradeep Augustine
Print
Facebook
WhatsApp
Twitter
Pinterest
Linkedin
Email
Telegram
LINE
Viber