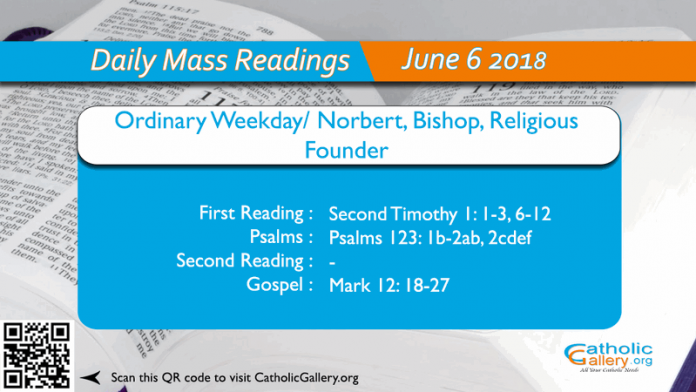 1 Paul, an apostle of Jesus Christ, by the will of God, according to the promise of life, which is in Christ Jesus.

2 To Timothy my dearly beloved son, grace, mercy, and peace, from God the Father, and from Christ Jesus our Lord.

3 I give thanks to God, whom I serve from my forefathers with a pure conscience, that without ceasing, I have a remembrance of thee in my prayers, night and day.

6 For which cause I admonish thee, that thou stir up the grace of God which is in thee, by the imposition of my hands.

7 For God hath not given us the spirit of fear: but of power, and of love, and of sobriety.

8 Be not thou therefore ashamed of the testimony of our Lord, nor of me his prisoner: but labour with the gospel, according to the power of God,

9 Who hath delivered us and called us by his holy calling, not according to our works, but according to his own purpose and grace, which was given us in Christ Jesus before the times of the world.

10 But is now made manifest by the illumination of our Saviour Jesus Christ, who hath destroyed death, and hath brought to light life and incorruption by the gospel:

11 Wherein I am appointed a preacher, and an apostle, and teacher of the Gentiles.

12 For which cause I also suffer these things: but I am not ashamed. For I know whom I have believed, and I am certain that he is able to keep that which I have committed unto him, against that day.

1 To thee have I lifted up my eyes, who dwellest in heaven.

18 And there came to him the Sadducees, who say there is no resurrection; and they asked him, saying:

19 Master, Moses wrote unto us, that if any man’s brother die, and leave his wife behind him, and leave no children, his brother should take his wife, and raise up seed to his brother.

20 Now there were seven brethren; and the first took a wife, and died leaving no issue.

21 And the second took her, and died: and neither did he leave any issue. And the third in like manner.

22 And the seven all took her in like manner; and did not leave issue. Last of all the woman also died.

23 In the resurrection therefore, when they shall rise again, whose wife shall she be of them? for the seven had her to wife.

24 And Jesus answering, saith to them: Do ye not therefore err, because you know not the scriptures, nor the power of God?

25 For when they shall rise again from the dead, they shall neither marry, nor be married, but are as the angels in heaven.

26 And as concerning the dead that they rise again, have you not read in the book of Moses, how in the bush God spoke to him, saying: I am the God of Abraham, and the God of Isaac, and the God of Jacob?

27 He is not the God of the dead, but of the living. You therefore do greatly err.

The readings on this page are taken from the Douay-Rheims Catholic Bible. You can also read the Mass Readings taken from the New Jerusalem Bible, which is used at Mass in most of the English-speaking world. (References, Copyrights).
◄ June 5 June 7 ►
By Pradeep Augustine
Print
Facebook
WhatsApp
Twitter
Pinterest
Linkedin
Email
Telegram
LINE
Viber