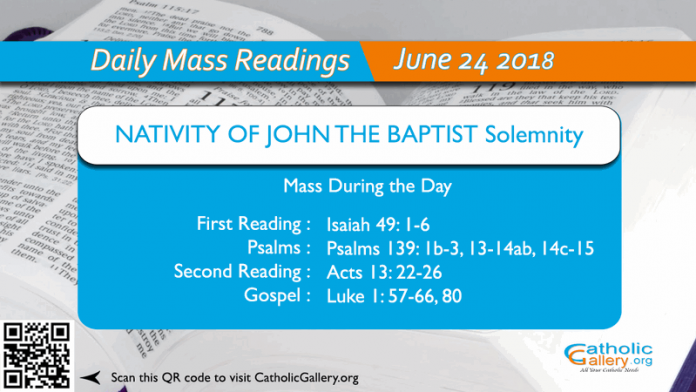 Mass During the Day

1 Give ear, ye islands, and hearken, ye people from afar. The Lord hath called me from the womb, from the bowels of my mother he hath been mindful of my name.

2 And he hath made my mouth like a sharp sword: in the shadow of his hand he hath protected me, and hath made me as a chosen arrow: in his quiver he hath hidden me.

3 And he said to me: Thou art my servant Israel, for in thee will I glory.

4 And I said: I have laboured in vain, I have spent my strength without cause and in vain: therefore my judgment is with the Lord, and my work with my God.

5 And now saith the Lord, that formed me from the womb to be his servant, that I may bring back Jacob unto him, and Israel will not be gathered together: and I am glorified in the eyes of the Lord, and my God is made my strength.

6 And he said: It is a small thing that thou shouldst be my servant to raise up the tribes of Jacob, and to convert the dregs of Israel. Behold, I have given thee to be the light of the Gentiles, that thou mayst be my salvation even to the farthest part of the earth.

22 And when he had removed him, he raised them up David to be king: to whom giving testimony, he said: I have found David, the son of Jesse, a man according to my own heart, who shall do all my wills.

23 Of this man’s seed God according to his promise, hath raised up to Israel a Saviour, Jesus:

24 John first preaching, before his coming, the baptism of penance to all the people of Israel.

25 And when John was fulfilling his course, he said: I am not he, whom you think me to be: but behold, there cometh one after me, whose shoes of his feet I am not worthy to loose.

26 Men, brethren, children of the stock of Abraham, and whosoever among you fear God, to you the word of this salvation is sent.

57 Now Elizabeth’s full time of being delivered was come, and she brought forth a son.

58 And her neighbours and kinsfolks heard that the Lord had shewed his great mercy towards her, and they congratulated with her.

59 And it came to pass, that on the eighth day they came to circumcise the child, and they called him by his father’s name Zachary.

60 And his mother answering, said: Not so; but he shall be called John.

61 And they said to her: There is none of thy kindred that is called by this name.

62 And they made signs to his father, how he would have him called.

63 And demanding a writing table, he wrote, saying: John is his name. And they all wondered.

64 And immediately his mouth was opened, and his tongue loosed, and he spoke, blessing God.

65 And fear came upon all their neighbours; and all these things were noised abroad over all the hill country of Judea.

66 And all they that had heard them laid them up in their heart, saying: What an one, think ye, shall this child be? For the hand of the Lord was with him.

80 And the child grew, and was strengthened in spirit; and was in the deserts until the day of his manifestation to Israel.

The readings on this page are taken from the Douay-Rheims Catholic Bible. You can also read the Mass Readings taken from the New Jerusalem Bible, which is used at Mass in most of the English-speaking world. (References, Copyrights).
◄ June 23 June 25 ►
By Pradeep Augustine
Print
Facebook
WhatsApp
Twitter
Pinterest
Linkedin
Email
Telegram
LINE
Viber