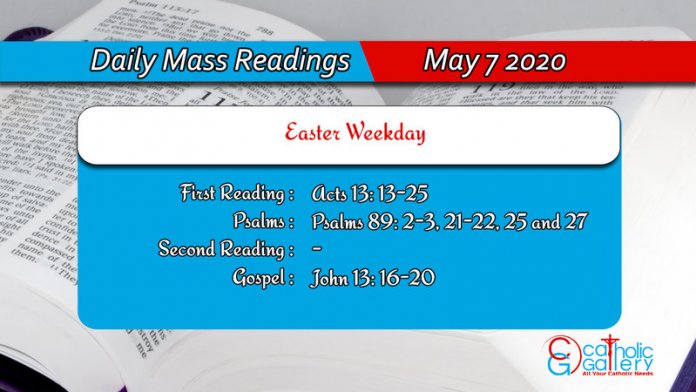 13 Now when Paul and they that were with him had sailed from Paphos, they came to Perge in Pamphylia. And John departing from them, returned to Jerusalem.

14 But they passing through Perge, came to Antioch in Pisidia: and entering into the synagogue on the sabbath day, they sat down.

15 And after the reading of the law and the prophets, the rulers of the synagogue sent to them, saying: Ye men, brethren, if you have any word of exhortation to make to the people, speak.

16 Then Paul rising up, and with his hand bespeaking silence, said: Ye men of Israel, and you that fear God, give ear.

17 The God of the people of Israel chose our fathers, and exalted the people when they were sojourners in the land of Egypt, and with an high arm brought them out from thence,

18 And for the space of forty years endured their manners in the desert.

19 And destroying seven nations in the land of Chanaan, divided their land among them, by lot,

20 As it were, after four hundred and fifty years: and after these things, he gave unto them judges, until Samuel the prophet.

21 And after that they desired a king: and God gave them Saul the son of Cis, a man of the tribe of Benjamin, forty years.

22 And when he had removed him, he raised them up David to be king: to whom giving testimony, he said: I have found David, the son of Jesse, a man according to my own heart, who shall do all my wills.

23 Of this man’s seed God according to his promise, hath raised up to Israel a Saviour, Jesus:

24 John first preaching, before his coming, the baptism of penance to all the people of Israel.

25 And when John was fulfilling his course, he said: I am not he, whom you think me to be: but behold, there cometh one after me, whose shoes of his feet I am not worthy to loose.

2 The mercies of the Lord I will sing for ever. I will shew forth thy truth with my mouth to generation and generation.

3 For thou hast said: Mercy shall be built up for ever in the heavens: thy truth shall be prepared in them.

21 I have found David my servant: with my holy oil I have anointed him.

22 For my hand shall help him: and my arm shall strengthen him.

25 And my truth and my mercy shall be with him: and in my name shall his horn be exalted.

17 If you know these things, you shall be blessed if you do them.

18 I speak not of you all: I know whom I have chosen. But that the scripture may be fulfilled: He that eateth bread with me, shall lift up his heel against me.

19 At present I tell you, before it come to pass: that when it shall come to pass, you may believe that I am he.

The readings on this page are taken from the Douay-Rheims Catholic Bible. You can also read the Mass Readings taken from the New Jerusalem Bible, which is used at Mass in most of the English-speaking world. (References, Copyrights)
◄ May – 6 May – 8 ►