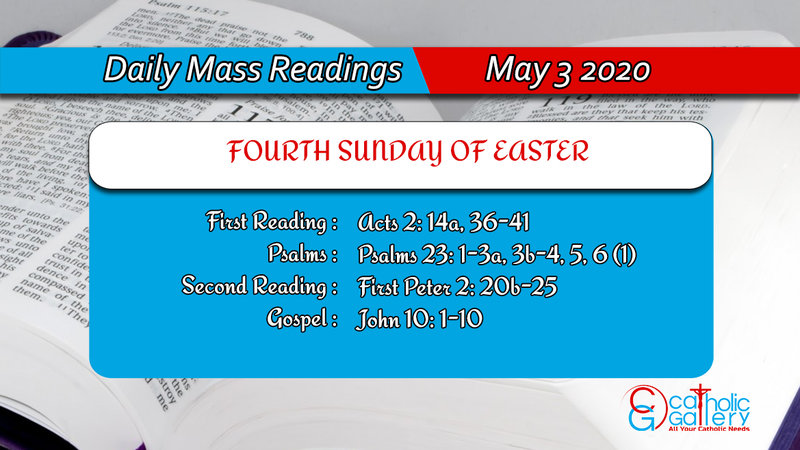 14 But Peter standing up with the eleven, lifted up his voice, and spoke to them: Ye men of Judea, and all you that dwell in Jerusalem, be this known to you, and with your ears receive my words.

36 Therefore let all the house of Israel know most certainly, that God hath made both Lord and Christ, this same Jesus, whom you have crucified.

37 Now when they had heard these things, they had compunction in their heart, and said to Peter, and to the rest of the apostles: What shall we do, men and brethren?

38 But Peter said to them: Do penance, and be baptized every one of you in the name of Jesus Christ, for the remission of your sins: and you shall receive the gift of the Holy Ghost.

39 For the promise is to you, and to your children, and to all that are far off, whomsoever the Lord our God shall call.

40 And with very many other words did he testify and exhort them, saying: Save yourselves from this perverse generation.

41 They therefore that received his word, were baptized; and there were added in that day about three thousand souls.

20 For what glory is it, if committing sin, and being buffeted for it, you endure? But if doing well you suffer patiently; this is thankworthy before God.

21 For unto this are you called: because Christ also suffered for us, leaving you an example that you should follow his steps.

22 Who did no sin, neither was guile found in his mouth.

23 Who, when he was reviled, did not revile: when he suffered, he threatened not: but delivered himself to him that judged him unjustly.

24 Who his own self bore our sins in his body upon the tree: that we, being dead to sins, should live to justice: by whose stripes you were healed.

25 For you were as sheep going astray; but you are now converted to the shepherd and bishop of your souls.

1 Amen, amen I say to you: He that entereth not by the door into the sheepfold, but climbeth up another way, the same is a thief and a robber.

2 But he that entereth in by the door is the shepherd of the sheep.

3 To him the porter openeth; and the sheep hear his voice: and he calleth his own sheep by name, and leadeth them out.

4 And when he hath let out his own sheep, he goeth before them: and the sheep follow him, because they know his voice.

5 But a stranger they follow not, but fly from him, because they know not the voice of strangers.

7 Jesus therefore said to them again: Amen, amen I say to you, I am the door of the sheep.

8 All others, as many as have come, are thieves and robbers: and the sheep heard them not.

9 I am the door. By me, if any man enter in, he shall be saved: and he shall go in, and go out, and shall find pastures.

10 The thief cometh not, but for to steal, and to kill, and to destroy. I am come that they may have life, and may have it more abundantly.

The readings on this page are taken from the Douay-Rheims Catholic Bible. You can also read the Mass Readings taken from the New Jerusalem Bible, which is used at Mass in most of the English-speaking world. (References, Copyrights).
◄ May – 2May – 4 ►
ByPradeep Augustine
Print
Facebook
WhatsApp
Twitter
Pinterest
Linkedin
Email
Telegram
LINE
Viber