Daily Mass Readings for Saturday, 9 May 2020 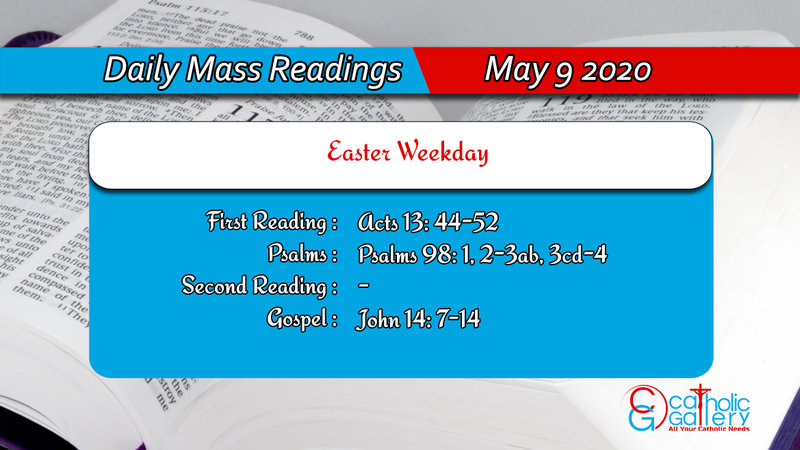 44 But the next sabbath day, the whole city almost came together, to hear the word of God.

45 And the Jews seeing the multitudes, were filled with envy, and contradicted those things which were said by Paul, blaspheming.

46 Then Paul and Barnabas said boldly: To you it behoved us first to speak the word of God: but because you reject it, and judge yourselves unworthy of eternal life, behold we turn to the Gentiles.

47 For so the Lord hath commanded us: I have set thee to be the light of the Gentiles; that thou mayest be for salvation unto the utmost part of the earth.

48 And the Gentiles hearing it, were glad, and glorified the word of the Lord: and as many as were ordained to life everlasting, believed.

49 And the word of the Lord was published throughout the whole country.

50 But the Jews stirred up religious and honourable women, and the chief men of the city, and raised persecution against Paul and Barnabas: and cast them out of their coasts.

51 But they, shaking off the dust of their feet against them, came to Iconium.

52 And the disciples were filled with joy and with the Holy Ghost.

2 The Lord hath made known his salvation: he hath revealed his justice in the sight of the Gentiles.

3 He hath remembered his mercy his truth toward the house of Israel. All the ends of the earth have seen the salvation of our God.

4 Sing joyfully to God, all the earth; make melody, rejoice and sing.

7 If you had known me, you would without doubt have known my Father also: and from henceforth you shall know him, and you have seen him.

8 Philip saith to him: Lord, shew us the Father, and it is enough for us.

9 Jesus saith to him: Have I been so long a time with you; and have you not known me? Philip, he that seeth me seeth the Father also. How sayest thou, shew us the Father?

10 Do you not believe, that I am in the Father, and the Father in me? The words that I speak to you, I speak not of myself. But the Father who abideth in me, he doth the works.

11 Believe you not that I am in the Father, and the Father in me?

12 Otherwise believe for the very works’ sake. Amen, amen I say to you, he that believeth in me, the works that I do, he also shall do; and greater than these shall he do.

13 Because I go to the Father: and whatsoever you shall ask the Father in my name, that will I do: that the Father may be glorified in the Son.

14 If you shall ask me any thing in my name, that I will do.

The readings on this page are taken from the Douay-Rheims Catholic Bible. You can also read the Mass Readings taken from the New Jerusalem Bible, which is used at Mass in most of the English-speaking world. (References, Copyrights).
◄ May – 8 May – 10 ►
By Pradeep Augustine
Print
Facebook
WhatsApp
Twitter
Pinterest
Linkedin
Email
Telegram
LINE
Viber