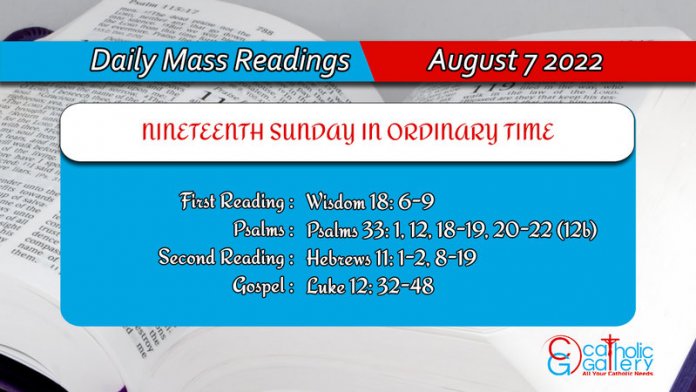 6 For that night was known before by our fathers, that assuredly knowing what oaths they had trusted to, they might be of better courage.

7 So thy people received the salvation of the just, and destruction of the unjust.

8 For as thou didst punish the adversaries: so thou didst also encourage and glorify us.

9 For the just children of good men were offering sacrifice secretly, and they unanimously ordered a law of justice: that the just should receive both good and evil alike, singing now the praises of the fathers.

1 A psalm for David. Rejoice in the Lord, O ye just: praise becometh the upright.

12 Blessed is the nation whose God is the Lord: the people whom he hath chosen for his inheritance.

20 Our soul waiteth for the Lord: for he is our helper and protector.

21 For in him our heart shall rejoice: and in his holy name we have trusted.

(12 Blessed is the nation whose God is the Lord: the people whom he hath chosen for his inheritance.)

2 For by this the ancients obtained a testimony.

8 By faith he that is called Abraham, obeyed to go out into a place which he was to receive for an inheritance; and he went out, not knowing whither he went.

9 By faith he abode in the land, dwelling in cottages, with Isaac and Jacob, the co-heirs of the same promise.

10 For he looked for a city that hath foundations; whose builder and maker is God.

11 By faith also Sara herself, being barren, received strength to conceive seed, even past the time of age; because she believed that he was faithful who had promised,

12 For which cause there sprung even from one (and him as good as dead) as the stars of heaven in multitude, and as the sand which is by the sea shore innumerable.

13 All these died according to faith, not having received the promises, but beholding them afar off, and saluting them, and confessing that they are pilgrims and strangers on the earth.

14 For they that say these things, do signify that they seek a country.

15 And truly if they had been mindful of that from whence they came out, they had doubtless time to return.

16 But now they desire a better, that is to say, a heavenly country. Therefore God is not ashamed to be called their God; for he hath prepared for them a city.

17 By faith Abraham, when he was tried, offered Isaac: and he that had received the promises, offered up his only begotten son;

18 (To whom it was said: In Isaac shall thy seed be called.)

19 Accounting that God is able to raise up even from the dead. Whereupon also he received him for a parable.

32 Fear not, little flock, for it hath pleased your Father to give you a kingdom.

33 Sell what you possess and give alms. Make to yourselves bags which grow not old, a treasure in heaven which faileth not: where no thief approacheth, nor moth corrupteth.

34 For where your treasure is, there will your heart be also.

35 Let your loins be girt, and lamps burning in your hands.

36 And you yourselves like to men who wait for their lord, when he shall return from the wedding; that when he cometh and knocketh, they may open to him immediately.

37 Blessed are those servants, whom the Lord when he cometh, shall find watching. Amen I say to you, that he will gird himself, and make them sit down to meat, and passing will minister unto them.

38 And if he shall come in the second watch, or come in the third watch, and find them so, blessed are those servants.

39 But this know ye, that if the householder did know at what hour the thief would come, he would surely watch, and would not suffer his house to be broken open.

40 Be you then also ready: for at what hour you think not, the Son of man will come.

41 And Peter said to him: Lord, dost thou speak this parable to us, or likewise to all?

42 And the Lord said: Who (thinkest thou) is the faithful and wise steward, whom his lord setteth over his family, to give them their measure of wheat in due season?

43 Blessed is that servant, whom when his lord shall come, he shall find so doing.

44 Verily I say to you, he will set him over all that he possesseth.

45 But if that servant shall say in his heart: My lord is long a coming; and shall begin to strike the menservants and maidservants, and to eat and to drink and be drunk:

46 The lord of that servant will come in the day that he hopeth not, and at the hour that he knoweth not, and shall separate him, and shall appoint him his portion with unbelievers.

47 And that servant who knew the will of his lord, and prepared not himself, and did not according to his will, shall be beaten with many stripes.

48 But he that knew not, and did things worthy of stripes, shall be beaten with few stripes. And unto whomsoever much is given, of him much shall be required: and to whom they have committed much, of him they will demand the more.

The readings on this page are taken from the Douay-Rheims Catholic Bible. You can also read the Mass Readings taken from the New Jerusalem Bible, which is used at Mass in most of the English-speaking world. (References, Copyrights)
◄ August – 6 August – 8 ►
By Pradeep Augustine
Print
Facebook
WhatsApp
Twitter
Pinterest
Linkedin
Email
Telegram
LINE
Viber