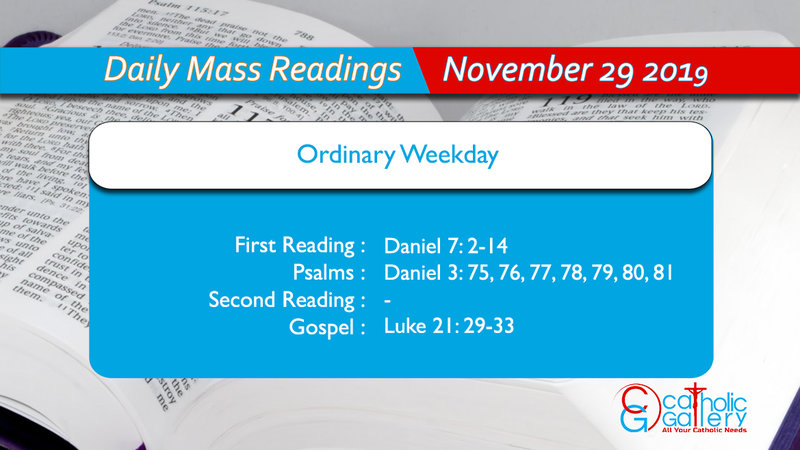 2 I saw in my vision by night, and behold the four winds of the heaven strove upon the great sea.

3 And four great beasts, different one from another, came up out of the sea.

4 The first was like a lioness, and had the wings of an eagle: I beheld till her wings were plucked off, and she was lifted up from the earth, and stood upon her feet as a man, and the heart of a man was given to her.

5 And behold another beast like a bear stood up on one side: and there were three rows in the mouth thereof, and in the teeth thereof, and thus they said to it: Arise, devour much flesh.

6 After this I beheld, and lo, another like a leopard, and it had upon it four wings as of a fowl, and the beast had four heads, and power was given to it.

7 After this I beheld in the vision of the night, and lo, a fourth beast, terrible and wonderful, and exceeding strong, it had great iron teeth, eating and breaking in pieces, and treading down the rest with its feet: and it was unlike to the other beasts which I had seen before it, and had ten horns.

8 I considered the horns, and behold another little horn sprung out of the midst of them: and three of the first horns were plucked up at the presence thereof: and behold eyes like the eyes of a man were in this horn, and a mouth speaking great things.

11 I beheld because of the voice of the great words which that horn spoke: and I saw that the beast was slain, and the body thereof was destroyed, and given to the fire to be burnt:

12 And that the power of the other beasts was taken away: and that times of life were appointed them for a time, and a time.

75 O ye mountains and hills, bless the Lord: praise and exalt him above all for ever.

76 O all ye things that spring up in the earth, bless the Lord: praise and exalt him above all for ever.

77 O ye fountains, bless the Lord: praise and exalt him above all for ever.

78 O ye seas and rivers, bless the Lord: praise and exalt him above all for ever.

79 O ye whales, and all that move in the waters, bless the Lord: praise and exalt him above all for ever.

80 O all ye fowls of the air, bless the Lord: praise and exalt him above all for ever.

81 O all ye beasts and cattle, bless the Lord: praise and exalt him above all for ever.

29 And he spoke to them in a similitude. See the fig tree, and all the trees:

30 When they now shoot forth their fruit, you know that summer is nigh;

31 So you also, when you shall see these things come to pass, know that the kingdom of God is at hand.

32 Amen, I say to you, this generation shall not pass away, till all things be fulfilled.

33 Heaven and earth shall pass away, but my words shall not pass away.

The readings on this page are taken from the Douay-Rheims Catholic Bible. You can also read the Mass Readings taken from the New Jerusalem Bible, which is used at Mass in most of the English-speaking world. (References, Copyrights).
◄ November – 28 November – 30 ►
ByPradeep Augustine
Print
Facebook
WhatsApp
Twitter
Pinterest
Linkedin
Email
Telegram
LINE
Viber