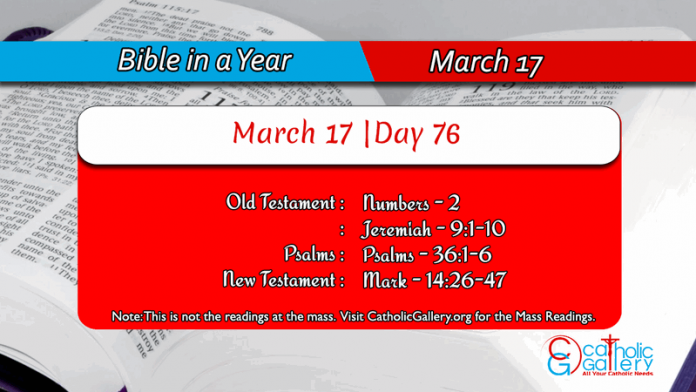 1 And the Lord spoke to Moses and Aaron, saying:

2 Each one shall make camp, by their troops, as well as by their insignia and standards, and by the houses of their kinships, all around the tabernacle of the covenant.

3 To the east, Judah shall fix his tents, by the companies of his army. And the leader of his sons shall be Nahshon the son of Amminadab.

4 And the entire total of the fighting men from his stock was seventy-four thousand six hundred.

5 Beside him, those of the tribe of Issachar were encamped, whose leader was Nathanael the son of Zuar.

6 And the entire number of his fighting men was fifty-four thousand four hundred.

7 In the tribe of Zebulon, the leader was Eliab the son of Helon.

8 All the army of fighting men from his stock were fifty-seven thousand four hundred.

9 All who were numbered in the camp of Judah were one hundred eighty-six thousand four hundred. And these, by their companies, shall go forth first.

10 In the camp of the sons of Ruben, toward the south side, the leader shall be Elizur the son of Shedeur.

11 And the entire army of his fighting men, who were numbered, were forty-six thousand five hundred.

12 Beside him, those of the tribe of Simeon were encamped, whose leader was Shelumiel the son of Zurishaddai.

13 And the entire army of his fighting men, who were numbered, were fifty-nine thousand three hundred.

14 In the tribe of Gad, the leader was Eliasaph the son of Reuel.

15 And the entire army of his fighting men, who were numbered, were forty-five thousand six hundred fifty.

16 All who were counted in the camp of Ruben were one hundred fifty thousand and one thousand four hundred fifty, by their companies. These shall advance in the second place.

17 But the tabernacle of the testimony shall be lifted up by the officers of the Levites and their companies. In the manner in which it is set up, so also shall it be taken down. Each one shall advance according to their places and ranks.

18 On the west side, there shall be the camp of the sons of Ephraim, whose leader was Elishama the son of Ammihud.

19 The entire army of his fighting men, who were numbered, were forty thousand five hundred.

20 And with them was the tribe of the sons of Manasseh, whose leader was Gamaliel the son of Pedahzur.

21 And the entire army of his fighting men, who were numbered, were thirty-two thousand two hundred.

22 In the tribe of the sons of Benjamin, the leader was Abidan the son of Gideoni.

23 And the entire army of his fighting men, who were counted, were thirty-five thousand four hundred.

24 All who were numbered in the camp of Ephraim were one hundred eight thousand one hundred, by their companies. These shall advance third.

25 Toward the north side, the sons of Dan were encamped, whose leader was Ahiezer the son of Ammishaddai.

26 The entire army of his fighting men, who were numbered, were sixty-two thousand seven hundred.

27 Beside him, those of the tribe of Asher fixed their tents, whose leader was Pagiel the son of Ochran.

28 The entire army of his fighting men, who were numbered, were forty thousand and one thousand five hundred.

29 From the tribe of the sons of Naphtali, the leader was Ahira the son of Enan.

30 The entire army of his fighting men were fifty-three thousand four hundred.

31 All who were numbered in the camp of Dan were one hundred fifty-seven thousand six hundred; and these shall advance at the very end.

32 This is the number of the sons of Israel, of their army divided by the houses of their kinships and their companies: six hundred three thousand five hundred fifty.

33 But the Levites were not numbered among the sons of Israel. For so the Lord had instructed Moses.

34 And the sons of Israel acted according to all the things that the Lord had commanded. They were encamped by their companies, and they advanced by the families and houses of their fathers.

1 Who will provide water for my head, and a fount of tears for my eyes? And then I will weep day and night for the slain of the daughter of my people.

2 Who will provide me, in the wilderness, with a lodging place along the road? And then I will forsake my people, and withdraw from them. For they are all adulterers, a union of transgressors.

3 And they have bent their tongue, like a bow, to send forth lies and not the truth. They have been strengthened upon the earth. And they have gone from one evil to another. But they have not known me, says the Lord.

4 Let each one guard himself against his neighbor, and let him have no trust in any brother of his. For every brother will utterly overthrow, and every friend will advance deceitfully.

5 And a man will deride his brother, and they will not speak the truth. For they have taught their tongue to speak lies; they have labored to commit iniquity.

6 Your habitation is in the midst of deceit. In their deceitfulness, they have refused to know me, says the Lord.”

7 Because of this, thus says the Lord of hosts: “Behold, I will refine them, and I will test them. For what else can I do before the face of the daughter of my people?

8 Their tongue is a wounding arrow; it has spoken deceit. With his mouth, he speaks peace with his friend, and then he secretly lies in ambush for him.

9 Shall I not visit upon them concerning these things, says the Lord? Or shall my soul not take vengeance on a nation of this kind?

10 I will take up weeping and lamentation over the mountains, and mourning over the beautiful places in the desert. For they have been scorched because no man is passing through them. And they have not heard the voice of any occupant. From the birds of the air, even to the cattle, they have migrated and withdrawn.

1 Unto the end, for the servant of God, David himself.

2 The unjust hath said within himself, that he would sin: there is no fear of God before his eyes.

3 For in his sight he hath done deceitfully, that his iniquity may be found unto hatred.

4 The words of his mouth are iniquity and guile: he would not understand that he might do well.

5 He hath devised iniquity on his bed, he hath set himself on every way that is not good: but evil he hath not hated.

6 O Lord, thy mercy is in heaven, and thy truth reacheth, even to the clouds.

26 And having sung a hymn, they went out to the Mount of Olives.

27 And Jesus said to them: “You will all fall away from me in this night. For it has been written: ‘I will strike the shepherd, and the sheep will be scattered.’

28 But after I have risen again, I will go before you to Galilee.”

29 Then Peter said to him, “Even if all will have fallen away from you, yet I will not.”

30 And Jesus said to him, “Amen I say to you, that this day, in this night, before the rooster has uttered its voice twice, you will deny me three times.”

31 But he spoke further, “Even if I must die along with you, I will not deny you.” And they all spoke similarly also.

32 And they went to a country estate, by the name of Gethsemani. And he said to his disciples, “Sit here, while I pray.”

33 And he took Peter, and James, and John with him. And he began to be afraid and wearied.

34 And he said to them: “My soul is sorrowful, even unto death. Remain here and be vigilant.”

35 And when he had proceeded on a little ways, he fell prostrate on the ground. And he prayed that, if it were possible, the hour might pass away from him.

36 And he said: “Abba, Father, all things are possible to you. Take this chalice from me. But let it be, not as I will, but as you will.”

37 And he went and found them sleeping. And he said to Peter: “Simon, are you sleeping? Were you not able to be vigilant for one hour?

38 Watch and pray, so that you may not enter into temptation. The spirit indeed is willing, but the flesh is weak.”

39 And going away again, he prayed, saying the same words.

40 And upon returning, he found them sleeping yet again, (for their eyes were heavy) and they did not know how to respond to him.

41 And he arrived for the third time, and he said to them: “Sleep now, and take rest. It is enough. The hour has arrived. Behold, the Son of man will be betrayed into the hands of sinners.

43 And while he was still speaking, Judas Iscariot, one of the twelve, arrived, and with him was a large crowd with swords and clubs, sent from the leaders of the priests, and the scribes, and the elders.

44 Now his betrayer had given them a sign, saying: “He whom I shall kiss, it is he. Take hold of him, and lead him away cautiously.”

45 And when he had arrived, immediately drawing near to him, he said: “Hail, Master!” And he kissed him.

46 But they laid hands on him and held him.

47 Then a certain one of those standing near, drawing a sword, struck a servant of the high priest and cut off his ear.

◄ March 16 March 18 ►
Bible in a year – Index
February April May
Simplest Bible in a Year plan compiled using the “Catholic Public Domain Version Bible“. This is not the Readings at the Mass. For the Mass Readings, check the Mass Readings taken from the New Jerusalem Bible or the Douay-Rheims Catholic Bible.
By Pradeep Augustine
Print
Facebook
WhatsApp
Twitter
Pinterest