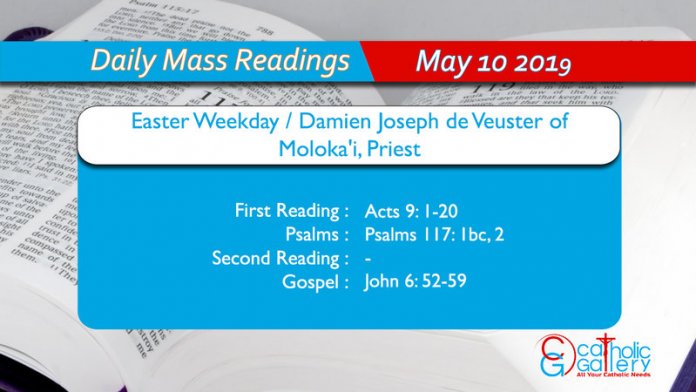 52The Jews therefore strove among themselves, saying: How can this man give us his flesh to eat?

53Then Jesus said to them: Amen, amen I say unto you: Except you eat the flesh of the Son of man, and drink his blood, you shall not have life in you.

54He that eateth my flesh, and drinketh my blood, hath everlasting life: and I will raise him up in the last day.

55For my flesh is meat indeed: and my blood is drink indeed.

56He that eateth my flesh, and drinketh my blood, abideth in me, and I in him.

57As the living Father hath sent me, and I live by the Father; so he that eateth me, the same also shall live by me.

58This is the bread that came down from heaven. Not as your fathers did eat manna, and are dead. He that eateth this bread, shall live for ever.

59These things he said, teaching in the synagogue, in Capharnaum.

The readings on this page are taken from the Douay-Rheims Catholic Bible. You can also read the Mass Readings taken from the New Jerusalem Bible, which is used at Mass in most of the English-speaking world. (References, Copyrights).
◄ May – 9 May – 11 ►
By Pradeep Augustine
Print
Facebook
WhatsApp
Twitter
Pinterest
Linkedin
Email
Telegram
LINE
Viber