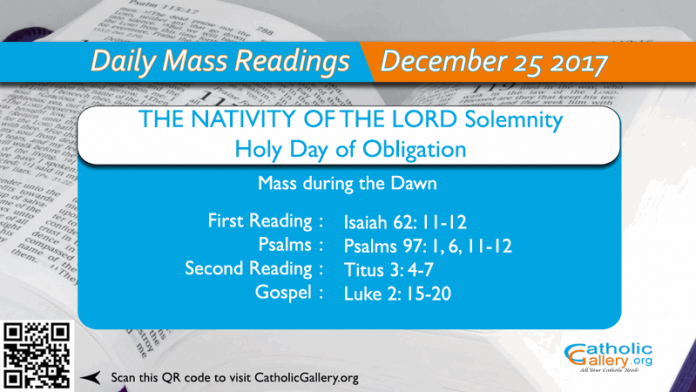 Mass During the Dawn

11 Behold the Lord hath made it to be heard in the ends of the earth, tell the daughter of Sion: Behold thy Saviour cometh: behold his reward is with him, and his work before him.

12 And they shall call them, The holy people, the redeemed of the Lord. But thou shalt be called: A city sought after, and not forsaken.

11 Light is risen to the just, and joy to the right of heart.

12 Rejoice, ye just, in the Lord: and give praise to the remembrance of his holiness.

4 But when the goodness and kindness of God our Saviour appeared:

5 Not by the works of justice, which we have done, but according to his mercy, he saved us, by the laver of regeneration, and renovation of the Holy Ghost;

6 Whom he hath poured forth upon us abundantly, through Jesus Christ our Saviour:

7 That, being justified by his grace, we may be heirs, according to hope of life everlasting.

15 And it came to pass, after the angels departed from them into heaven, the shepherds said one to another: Let us go over to Bethlehem, and let us see this word that is come to pass, which the Lord hath shewed to us.

16 And they came with haste; and they found Mary and Joseph, and the infant lying in the manger.

17 And seeing, they understood of the word that had been spoken to them concerning this child.

18 And all that heard, wondered; and at those things that were told them by the shepherds.

19 But Mary kept all these words, pondering them in her heart.

20 And the shepherds returned, glorifying and praising God, for all the things they had heard and seen, as it was told unto them.

The readings on this page are taken from the Douay-Rheims Catholic Bible. You can also read the Mass Readings taken from the New Jerusalem Bible, which is used at Mass in most of the English-speaking world. (References, Copyrights).
◄ December 24 December 26 ►
By Pradeep Augustine
Print
Facebook
WhatsApp
Twitter
Pinterest
Linkedin
Email
Telegram
LINE
Viber