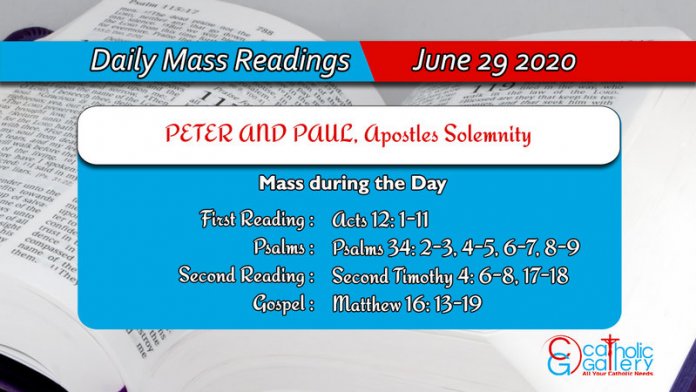 Mass during the day

1 And at the same time, Herod the king stretched forth his hands, to afflict some of the church.

2 And he killed James, the brother of John, with the sword.

3 And seeing that it pleased the Jews, he proceeded to take up Peter also. Now it was in the days of the Azymes.

4 And when he had apprehended him, he cast him into prison, delivering him to four files of soldiers to be kept, intending, after the pasch, to bring him forth to the people.

5 Peter therefore was kept in prison. But prayer was made without ceasing by the church unto God for him.

6 And when Herod would have brought him forth, the same night Peter was sleeping between two soldiers, bound with two chains: and the keepers before the door kept the prison.

7 And behold an angel of the Lord stood by him: and a light shined in the room: and he striking Peter on the side, raised him up, saying: Arise quickly. And the chains fell off from his hands.

8 And the angel said to him: Gird thyself, and put on thy sandals. And he did so. And he said to him: Cast thy garment about thee, and follow me.

9 And going out, he followed him, and he knew not that it was true which was done by the angel: but thought he saw a vision.

10 And passing through the first and the second ward, they came to the iron gate that leadeth to the city, which of itself opened to them. And going out, they passed on through one street: and immediately the angel departed from him.

11 And Peter coming to himself, said: Now I know in very deed, that the Lord hath sent his angel, and hath delivered me out of the hand of Herod, and from all the expectation of the people of the Jews.

2 I will bless the Lord at all times, his praise shall be always in my mouth.

3 In the Lord shall my soul be praised: let the meek hear and rejoice.

4 O magnify the Lord with me; and let us extol his name together.

5 I sought the Lord, and he heard me; and he delivered me from all my troubles.

6 Come ye to him and be enlightened: and your faces shall not be confounded.

7 This poor man cried, and the Lord heard him: and saved him out of all his troubles.

8 The angel of the Lord shall encamp round about them that fear him: and shall deliver them.

9 O taste, and see that the Lord is sweet: blessed is the man that hopeth in him.

6 For I am even now ready to be sacrificed: and the time of my dissolution is at hand.

7 I have fought a good fight, I have finished my course, I have kept the faith.

8 As to the rest, there is laid up for me a crown of justice, which the Lord the just judge will render to me in that day: and not only to me, but to them also that love his coming. Make haste to come to me quickly.

17 But the Lord stood by me, and strengthened me, that by me the preaching may be accomplished, and that all the Gentiles may hear: and I was delivered out of the mouth of the lion.

18 The Lord hath delivered me from every evil work: and will preserve me unto his heavenly kingdom, to whom be glory for ever and ever. Amen.

13 And Jesus came into the quarters of Caesarea Philippi: and he asked his disciples, saying: Whom do men say that the Son of man is?

14 But they said: Some John the Baptist, and other some Elias, and others Jeremias, or one of the prophets.

15 Jesus saith to them: But whom do you say that I am?

16 Simon Peter answered and said: Thou art Christ, the Son of the living God.

17 And Jesus answering, said to him: Blessed art thou, Simon Bar-Jona: because flesh and blood hath not revealed it to thee, but my Father who is in heaven.

18 And I say to thee: That thou art Peter; and upon this rock I will build my church, and the gates of hell shall not prevail against it.

The readings on this page are taken from the Douay-Rheims Catholic Bible. You can also read the Mass Readings taken from the New Jerusalem Bible, which is used at Mass in most of the English-speaking world. (References, Copyrights).
◄ June – 28 June – 30 ►
By Pradeep Augustine
Print
Facebook
WhatsApp
Twitter
Pinterest
Linkedin
Email
Telegram
LINE
Viber