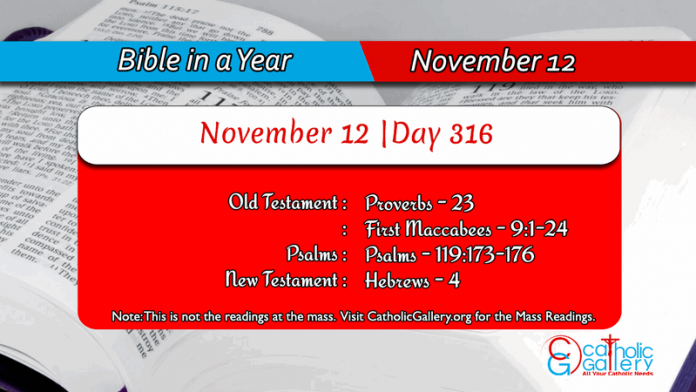 1 When you sit down to eat with a leader, pay close attention to what has been set before your face,

2 and put a knife to your throat, if, in such a way, you could hold your soul in your own power.

3 Do not desire his foods, in which is the bread of deceit.

4 Do not be willing to labor so that you may be enriched. But set limits by your prudence.

5 Do not raise your eyes toward wealth that you are not able to have. For they will make themselves wings, like those of an eagle, and they will fly in the sky.

6 Do not eat with an envious man, and do not desire his foods.

7 For, like a seer and an interpreter of dreams, he presumes what he does not know. “Eat and drink,” he will say to you; and his mind is not with you.

8 The foods that you had eaten, you will vomit up. And you will lose the beauty in your words.

9 Do not speak into the ears of the unwise. They will despise the doctrine of your eloquence.

10 Do not touch the boundaries of little ones, and do not enter into the field of the fatherless.

11 For their close relative is strong, and he will judge their case against you.

12 Let your heart enter into doctrine, and let your ears enter into words of knowledge.

13 Do not be willing to take away discipline from a child. For if you strike him with the rod, he will not die.

14 You will strike him with the rod, and so shall you deliver his soul from Hell.

15 My son, if your soul will become wise, my heart will be glad with you.

16 And my temperament will exult, when your lips will have spoken what is upright.

17 Let not your heart compete with sinners. But be in the fear of the Lord all day long.

18 For you will have hope in the end, and your expectation will not be taken away.

19 Listen, my son, and be wise, and direct your soul along the way.

20 Do not be willing to be in the feasts of great drinkers, nor in the carousings of those who gather to feed on flesh.

21 For those who waste time drinking, and who surrender themselves to symbols, will be consumed. And those who sleep will be clothed in rags.

22 Listen to your father, who conceived you. And do not despise your mother, when she is old.

23 Purchase truth, and do not sell wisdom, or doctrine, or understanding.

24 The father of the just exults in gladness; he who has conceived the wise will rejoice in him.

25 Let your father and your mother be joyful, and may she who conceived you exult.

26 My son, offer me your heart, and let your eyes keep to my ways.

27 For a loose woman is a deep pit, and a foreign woman is a constricted well.

28 She lies in wait along the way like a robber. And the incautious one whom she sees, she will put to death.

30 Is it not those who linger over wine, and who strive to be drinking from their cups?

31 Do not gaze into the wine when it turns gold, when its color shines in the glass. It enters pleasantly,

32 but in the end, it will bite like a snake, and it will spread poison like a king of snakes.

33 Your eyes will see women who are outsiders, and your heart will utter perversities.

34 And you will be like someone sleeping in the middle of the sea, and like a pilot, fast asleep, who has lost his hold on the helm.

35 And you will say: “They have beaten me, but I did not feel pain. They have dragged me, and I did not realize it. When will I awaken and find more wine?”

1 Meanwhile, when Demetrius heard that Nicanor and his army had fallen in battle, he again positioned Bacchides and Alcimus in Judea, and the right horn of his army with them.

2 And they traveled by the way that leads to Gilgal, and they set up camp in Mesaloth, which is in Arbela. And they occupied it, and they destroyed the lives of many men.

3 In the first month of the one hundred and fifty-second year, they positioned the army near Jerusalem.

4 And they rose up and went to Berea, with twenty thousand men and two thousand horsemen.

5 Now Judas had stationed his camp in Elasa, and three thousand chosen men were with him.

6 And they saw the multitude of the army, that they were many, and they became very afraid. And many withdrew themselves from the camp, and there remained of them no more than eight hundred men.

7 And Judas saw that his army had slipped away and that the battle pressed upon him, and his heart was shattered, because he did not have time to gather them together, and he was very discouraged.

8 And so, he said to those who were remaining, “Let us rise up and go against our enemies, perhaps we may be able to fight against them.”

9 But they dissuaded him, saying: “We will not be able, but let us try to save our lives and return to our brothers, and then we will fight against them. For we are but few.”

10 And Judas said: “Far be it from us, to do this thing, so as to flee away from them. But if our time has drawn near, let us die with virtue, on behalf of our brothers, and let us not inflict guilt upon our glory.”

11 And the army moved from the camp, and they stood to meet them. And the horsemen were divided into two parts, and the stone-slingers and archers went before the army, and the first ones were all powerful men, experienced in combat.

12 Moreover, Bacchides was with the right horn, and the legion drew near on both sides, and they sounded the trumpets.

13 But those also who were from the side of Judas, these also now cried out, and the earth shook at the noise of the armies. And the battle was joined from morning, even until evening.

14 And Judas saw that the stronger part of the army of Bacchides was on the right side, and all the steadfast in heart came together with him.

15 And the right part was crushed by them, and he pursued them even to Mount Azotus.

17 And the battle was hard fought, and there fell many wounded from one side and the other.

18 And Judas fell, and the others fled away.

19 And Jonathan and Simon carried Judas, their brother, and they buried him in the sepulcher of their fathers, in the city of Modin.

20 And all the people of Israel wept for him with a great wailing, and they mourned him for many days.

21 And they said, “Such a powerful man has fallen, who accomplished the salvation of the people of Israel!”

22 But the rest of the words, about the wars of Judas, and the virtuous acts that he did, and his magnitude, have not been written. For they were very many.

23 And it happened that, after the death of Judas, the iniquitous began to emerge in all the parts of Israel, and they began to encourage all those who worked iniquity.

24 In those days, there occurred a very great famine, and the entire region handed itself over to Bacchides.

173 Let thy hand be with me to save me; for I have chosen thy precepts.

174 I have longed for thy salvation, O Lord; and thy law is my meditation.

175 My soul shall live and shall praise thee: and thy judgments shall help me.

176 I have gone astray like a sheep that is lost: seek thy servant, because I have not forgotten thy commandments.

1 Therefore, we should be afraid, lest the promise of entering into his rest may be relinquished, and some of you may be judged to be lacking.

2 For this was announced to us in a similar manner as to them. But the mere hearing of the word did not benefit them, since it was not joined together with a faith in those things that they heard.

3 For we who have believed shall enter into rest, in the same manner as he said: “So it is as I have sworn in my wrath: They shall not enter into my rest!” And certainly, this is when the works from the foundation of the world have been finished.

5 And in this place again: “They shall not enter into my rest!”

6 Therefore, this is because certain ones remain who are to enter into it, and those to whom it was announced first did not enter into it, because of unbelief.

7 Again, he defines a certain day, after so much time, saying in David, “Today,” just as it was stated above, “If today you hear his voice, harden not your hearts.”

8 For if Jesus had offered them rest, he would never have spoken, afterward, about another day.

9 And so, there remains a Sabbath of rest for the people of God.

10 For whoever has entered into his rest, the same has also rested from his works, just as God did from his.

11 Therefore, let us hasten to enter into that rest, so that no one may fall into the same example of unbelief.

12 For the Word of God is living and effective: more piercing than any two-edged sword, reaching to the division even between the soul and the spirit, even between the joints and the marrow, and so it discerns the thoughts and intentions of the heart.

13 And there is no created thing that is invisible to his sight. For all things are naked and open to the eyes of him, about whom we are speaking.

14 Therefore, since we have a great High Priest, who has pierced the heavens, Jesus the Son of God, we should hold to our confession.

15 For we do not have a high priest who is unable to have compassion on our infirmities, but rather one who was tempted in all things, just as we are, yet without sin.

16 Therefore, let us go forth with confidence toward the throne of grace, so that we may obtain mercy, and find grace, in a helpful time.