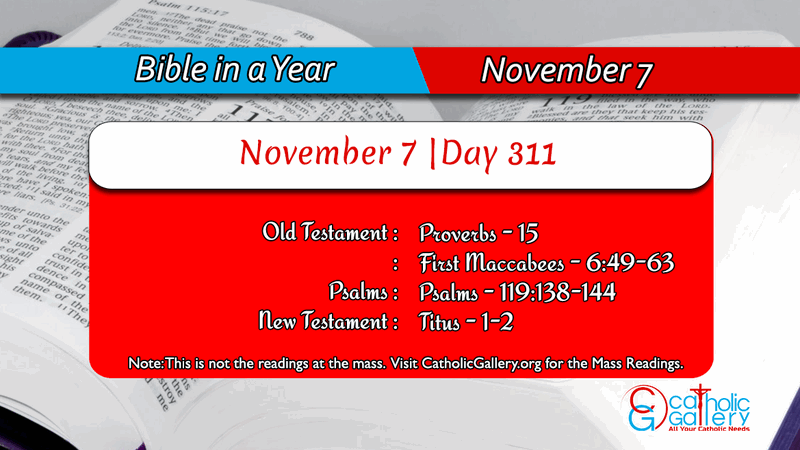 1 A mild response shatters anger. But a harsh word stirs up fury.

2 The tongue of the wise adorns knowledge. But the mouth of the senseless gushes with foolishness.

3 In every place, the eyes of the Lord consider good and evil.

4 A peaceful tongue is a tree of life. But that which is immoderate will crush the spirit.

5 A fool laughs at the discipline of his father. But whoever preserves rebukes will become astute. In abundant justice, there is very great virtue. But the intentions of the impious will be eradicated.

6 The house of the just has very great strength. And in the fruits of the impious, there is disorder.

7 The lips of the wise shall disseminate knowledge. The heart of the foolish will be dissimilar.

8 The sacrifices of the impious are abominable to the Lord. The vows of the just are appeasing.

9 The way of the impious is an abomination to the Lord. Whoever pursues justice is loved by him.

10 Doctrine is evil to those who abandon the way of life. Whoever hates correction shall die.

11 Hell and perdition are in the sight of the Lord. How much more the hearts of the sons of men!

12 He who corrupts himself does not love the one who afflicts him, nor will he step toward the wise.

13 A rejoicing heart gladdens the face. But by the grief of the soul, the spirit is cast down.

14 The heart of the wise seeks doctrine. And the mouth of the foolish feeds on ignorance.

15 All the days of the poor are evil. A secure mind is like a continual feast.

16 Better is a little with the fear of the Lord, than great treasures and dissatisfaction.

17 It is better to be called to vegetables with charity, than to a fatted calf with hatred.

18 A short-tempered man provokes conflicts. Whoever is patient tempers those who are stirred up.

20 A wise son gladdens the father. But the foolish man despises his mother.

21 Folly is gladness to the foolish. And the prudent man sets his own steps in order.

22 Intentions dissipate where there is no counsel. Yet truly, they are confirmed where there are many counselors.

23 A man rejoices in the verdict of his own mouth. And a word at the right time is best.

24 The path of life is for the wise above, so that he may turn away from the end of Hell.

25 The Lord will demolish the house of the arrogant. And He will make firm the borders of the widow.

26 Evil intentions are an abomination to the Lord. And pure conversation, most beautiful, shall be confirmed by him.

27 Whoever pursues avarice disturbs his own house. But whoever hates bribes shall live. Through mercy and faith, sins are purged. But through the fear of the Lord, each one turns aside from evil.

28 The mind of the just meditates on obedience. The mouth of the impious overflows with evils.

29 The Lord is distant from the impious. And he will heed the prayers of the just.

30 The light of the eyes rejoices the soul. A good reputation fattens the bones.

31 The ear that listens to the reproofs of life shall abide in the midst of the wise.

32 Whoever rejects discipline despises his own soul. But whoever agrees to correction is a possessor of the heart.

33 The fear of the Lord is the discipline of wisdom. And humility precedes glory.

49 And he made peace with those who were in Bethzur. And they went out of the city, because they had no provisions in their confinement, for it was the Sabbath of the land.

50 And the king captured Bethzur, and he stationed a garrison there to keep it.

51 And he turned his camp against the place of sanctification for many days. And he stationed there catapults and other machines: machines to cast fire, and windlasses to cast stones and darts, and small catapults to cast arrows and metal.

52 But they also made machines against their machines, and they fought for many days.

53 But there were no foods in the city, because it was the seventh year. And those who had remained in Judea were from the Gentiles, so they consumed all that they had left from what had been stored up.

54 And there remained in the holy places a few men, for the famine had prevailed over them. And they were scattered, each one to his own place.

55 Then Lysias heard that Philip, whom king Antiochus had appointed, when he was still alive, to raise his son, Antiochus, and to reign,

56 had returned from Persia and Media, with the army that went with him, and that he sought to take upon himself the affairs of the kingdom.

57 He hurried to go and to say to the king and the commanders of the army: “We are weakened everyday, and our food is limited, and the place that we besiege is strong, and it is incumbent upon us to put the kingdom in order.

58 And so now, let us bestow a pledge to these men, and make peace with them and with all their nation.

59 And let us establish for them that they may walk according to their own laws, just as before. For, because of their laws, which we despised, they have become angry and have done all these things.”

60 And the idea was pleasing in the sight of the king and the leaders. And he sent to them to make peace. And they accepted it.

61 And the king and the leaders swore to them. And they went out of the stronghold.

62 Then the king entered into Mount Zion, and saw the fortifications of the place, and so he abruptly broke the oath that he had sworn, and he commanded the surrounding wall to be destroyed.

63 And he departed in haste and returned to Antioch, where he found Philip ruling the city. And he fought against him and occupied the city.

138 Thou hast commanded justice thy testimonies: and thy truth exceedingly.

139 My zeal hath made me pine away: because my enemies forgot thy words.

140 Thy word is exceedingly refined: and thy servant hath loved it.

141 I am very young and despised; but I forgot not thy justifications.

142 Thy justice is justice for ever: and thy law is the truth.

143 Trouble and anguish have found me: thy commandments are my meditation.

144 Thy testimonies are justice for ever: give me understanding, and I shall live.

1 Paul, a servant of God and an Apostle of Jesus Christ, in accord with the faith of God’s elect and in acknowledgment of the truth which is accompanied by piety,

2 in the hope of the eternal life that God, who does not lie, promised before the ages of time,

3 which, at the proper time, he has manifested by his Word, in the preaching that has been entrusted to me by the command of God our Savior;

4 to Titus, beloved son according to the common faith. Grace and peace, from God the Father and from Christ Jesus our Savior.

5 For this reason, I left you behind in Crete: so that those things which are lacking, you would correct, and so that you would ordain, throughout the communities, priests, (just as I also ordained you)

6 if such a man is without offense, the husband of one wife, having faithful children, not accused of self-indulgence, nor of insubordination.

7 And a bishop, as a steward of God, must be without offense: not arrogant, not short-tempered, not a drunkard, not violent, not desiring tainted profit,

9 embracing faithful speech which is in agreement with doctrine, so that he may be able to exhort in sound doctrine and to argue against those who contradict.

10 For there are, indeed, many who are disobedient, who speak empty words, and who deceive, especially those who are of the circumcision.

11 These must be reproved, for they subvert entire houses, teaching things which should not be taught, for the favor of shameful gain.

12 A certain one of these, a prophet of their own kind, said: “The Cretans are ever liars, evil beasts, lazy gluttons.”

13 This testimony is true. Because of this, rebuke them sharply, so that they may be sound in the faith,

14 not paying attention to Jewish fables, nor to the rules of men who have turned themselves away from the truth.

16 They claim that they know God. But, by their own works, they deny him, since they are abominable, and unbelieving, and reprobate, toward every good work.

1 But you are to speak the things that befit sound doctrine.

2 Old men should be sober, chaste, prudent, sound in faith, in love, in patience.

3 Old women, similarly, should be in holy attire, not false accusers, not given to much wine, teaching well,

5 be sensible, chaste, restrained, have concern for the household, be kind, be subordinate to their husbands: so that the Word of God may be not blasphemed.

6 Exhort young men similarly, so that they may show self-restraint.

7 In all things, present yourself as an example of good works: in doctrine, with integrity, with seriousness,

8 with sound words, irreproachably, so that he who is an opponent may dread that he has nothing evil to say about us.

9 Exhort servants to be submissive to their masters, in all things pleasing, not contradicting,

10 not cheating, but in all things showing good fidelity, so that they may adorn the doctrine of God our Savior in all things.

11 For the grace of God our Savior has appeared to all men,

12 instructing us to reject impiety and worldly desires, so that we may live soberly and justly and piously in this age,

13 looking forward to the blessed hope and the advent of the glory of the great God and of our Savior Jesus Christ.

14 He gave himself for our sake, so that he might redeem us from all iniquity, and might cleanse for himself an acceptable people, pursuers of good works.

15 Speak and exhort and argue these things with all authority. Let no one despise you.