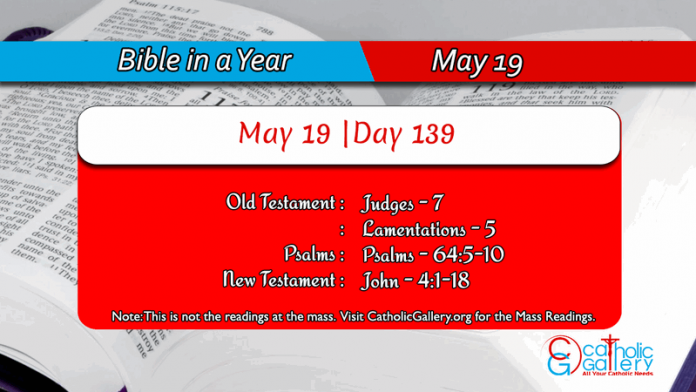 1 And so Jerubbaal, who is also Gideon, rising in the night, and all the people with him, went to the fountain which is called Harod. Now the camp of Midian was in the valley, to the northern region of the high hill.

2 And the Lord said to Gideon: “The people with you are many, but Midian shall not be delivered into their hands, for then Israel might glory against me, and say, ‘I was freed by my own power.’

3 Speak to the people, and proclaim in the hearing of all, ‘Whoever is has dread or fear, let him return.’ And twenty-two thousand of the men from the people withdrew from Mount Gilead and returned, and only ten thousand remained.

4 And the Lord said to Gideon: “The people are still too many. Lead them to the waters, and there I will test them. And those about whom I tell you that he may go with you, let him go; he whom I shall forbid to go, let him return.”

5 And when the people had descended to the waters, the Lord said to Gideon: “Whoever will lap the water with the tongue, as dogs usually lap, you shall separate them by themselves. Then those who will drink by bending their knees shall be on the other side.”

6 And so the number of those who had lapped the water, by bringing it with the hand to the mouth, was three hundred men. And all the remainder of the multitude drank by bending the knee.

7 And the Lord said to Gideon: “By the three hundred men who lapped the water, I will free you, and I will deliver Midian into your hand. But let all the remainder of the multitude return to their place.”

8 And so, taking food and trumpets in accord with their number, he instructed all the rest of the multitude to go back to their tents. And with the three hundred men, he gave himself to the conflict. Now the camp of Midian was below, in the valley.

9 In the same night, the Lord said to him: “Rise up, and descend into the camp. For I have delivered them into your hand.

10 But if you dread to go alone, let your servant Purah descend with you.

11 And when you will hear what they are saying, then your hands will be strengthened, and you will descend more confidently to the camp of the enemy.” Therefore, he descended with his servant Purah into a portion of the camp, where there was a watch of armed men.

12 But Midian, and Amalek, and all the eastern peoples lay spread out in the valley, like a multitude of locusts. Their camels, too, were innumerable, like the sand that lies on the shore of the sea.

13 And when Gideon had arrived, someone told his neighbor a dream. And he related what he had seen, in this way: “I saw a dream, and it seemed to me as if bread, baked under ashes from rolled barley, descended into the camp of Midian. And whenever it arrived at a tent, it struck it, and overturned it, and utterly leveled it to the ground.”

14 He to whom he spoke, responded: “This is nothing else but the sword of Gideon, the son of Joash, a man of Israel. For the Lord has delivered Midian into his hands, with their entire camp.”

15 And when Gideon had heard the dream and its interpretation, he worshipped. And he returned to the camp of Israel, and he said: “Rise up! For the Lord has delivered the camp of Midian into our hands.”

16 And he divided the three hundred men into three parts. And he gave trumpets, and empty pitchers, and lamps for the middle of the pitchers, into their hands.

17 And he said to them: “What you will see me do, do the same. I will enter a portion of the camp, and what I do, you shall follow.

18 When the trumpet in my hand blares out, you also shall sound the trumpets, on every side of the camp, and shout together to the Lord and to Gideon.”

19 And Gideon, and the three hundred men who were with him, entered a portion of the camp, at the beginning of the watch in the middle of the night. And when the guards were alerted, they began to sound the trumpets and to clap the pitchers against one another.

20 And when they had sounded their trumpets in three places around the camp, and had broken their water pitchers, they held the lamps in their left hands, and sounded the trumpets in their right hands. And they cried out, “The sword of the Lord and of Gideon!”

21 And each one was standing in his place throughout the camp of the enemies. And so the entire camp was in confusion; and they fled away, wailing and crying out.

22 And the three hundred men nevertheless continued sounding the trumpets. And the Lord sent the sword into the entire camp, and they maimed and cut down one another,

23 fleeing as far as Bethshittah, and the base of Abelmeholah in Tabbath. But the men of Israel pursued Midian, shouting from Naphtali and Asher, and from all of Manasseh.

25 And having apprehended two men of Midian, Oreb and Zeeb, they put Oreb to death at the Rock of Oreb, and truly, Zeeb, at the Winepress of Zeeb. And they pursued Midian, carrying the heads of Oreb and Zeeb to Gideon, across the waters of the Jordan.

1 Remember, O Lord, what has befallen us. Consider and look kindly upon our disgrace.

2 Our inheritance has been turned over to foreigners; our houses to outsiders.

3 We have become orphans without a father; our mothers are like widows.

4 We paid for our drinking water. We acquired our wood for a price.

5 We were dragged by our necks. Being weary, no rest was given to us.

6 We have given our hand to Egypt and to the Assyrians, so that we may be satisfied with bread.

7 Our fathers have sinned, and are not. And we have carried their iniquities.

8 Servants have become rulers over us. There was no one to redeem us from their hand.

9 We obtained our bread at the risk of our lives, before the face of the sword, in the wilderness.

10 Our skin was burned, as if by an oven, before the face of the tempest of the famine.

11 They humiliated the women in Zion and the virgins in the cities of Judah.

12 The leaders were suspended by their hand. They were not ashamed before the faces of the elders.

13 They have sexually abused the adolescents, and the children were corrupted in the wood.

14 The elders have ceased from the gates, the youths from the choir of the psalms.

15 The gladness of our heart has failed, our singing has been turned into mourning.

16 The crown has fallen from our head. Woe to us, for we have sinned.

17 Because of this, our heart became gloomy; for this reason, our eyes have been darkened:

18 because of mount Zion, because it was ruined. Foxes have wandered upon it.

19 But you, O Lord, shall remain for eternity, your throne from generation to generation.

21 Convert us, O Lord, to you, and we shall be converted. Renew our days, as from the beginning.

22 But you have utterly rejected us; you are vehemently angry against us.

5 To shoot in secret the undefiled.

6 They will shoot at him on a sudden, and will not fear: they are resolute in wickedness. They have talked of hiding snares; they have said: Who shall see them?

7 They have searched after iniquities: they have failed in their search. Man shall come to a deep heart:

8 And God shall be exalted. The arrows of children are their wounds:

9 And their tongues against them are made weak. All that saw them were troubled;

10 And every man was afraid. And they declared the works of God: and understood his doings.

11 The just shall rejoice in the Lord, and shall hope in him: and all the upright in heart shall be praised.

1 And so, when Jesus realized that the Pharisees had heard that Jesus made more disciples and baptized more than John,

2 (though Jesus himself was not baptizing, but only his disciples)

3 he left behind Judea, and he traveled again to Galilee.

4 Now he needed to cross through Samaria.

5 Therefore, he went into a city of Samaria which is called Sychar, near the estate which Jacob gave to his son Joseph.

6 And Jacob’s well was there. And so Jesus, being tired from the journey, was sitting in a certain way on the well. It was about the sixth hour.

7 A woman of Samaria arrived to draw water. Jesus said to her, “Give me to drink.”

8 For his disciples had gone into the city in order to buy food.

9 And so, that Samaritan woman said to him, “How is it that you, being a Jew, are requesting a drink from me, though I am a Samaritan woman?” For the Jews do not associate with the Samaritans.

10 Jesus responded and said to her: “If you knew the gift of God, and who it is who is saying to you, ‘Give me to drink,’ perhaps you would have made a request of him, and he would have given you living water.”

11 The woman said to him: “Lord, you do not have anything with which to draw water, and the well is deep. From where, then, do you have living water?

12 Surely, you are not greater than our father Jacob, who gave us the well and who drank from it, with his sons and his cattle?”

13 Jesus responded and said to her: “All who drink from this water will thirst again. But whoever shall drink from the water that I will give to him will not thirst for eternity.

14 Instead, the water that I will give to him will become in him a fountain of water, springing up into eternal life.”

15 The woman said to him, “Lord, give me this water, so that I may not thirst and may not come here to draw water.”

18 For you have had five husbands, but he whom you have now is not your husband. You have spoken this in truth.”

◄ May 18 May 20 ►
Bible in a year – Index
April June July
Simplest Bible in a Year plan compiled using the “Catholic Public Domain Version Bible“. This is not the Readings at the Mass. For the Mass Readings, check the Mass Readings taken from the New Jerusalem Bible or the Douay-Rheims Catholic Bible.
By Pradeep Augustine
Print
Facebook
WhatsApp
Twitter
Pinterest