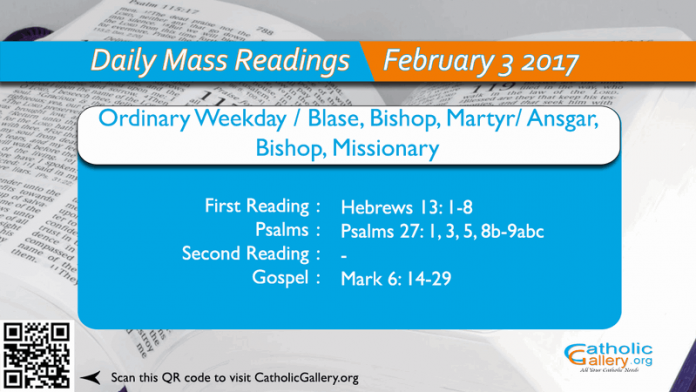 1 Let the charity of the brotherhood abide in you.

2 And hospitality do not forget; for by this some, being not aware of it, have entertained angels.

3 Remember them that are in bands, as if you were bound with them; and them that labour, as being yourselves also in the body.

4 Marriage honourable in all, and the bed undefiled. For fornicators and adulterers God will judge.

5 Let your manners be without covetousness, contented with such things as you have; for he hath said: I will not leave thee, neither will I forsake thee.

6 So that we may confidently say: The Lord is my helper: I will not fear what man shall do to me.

7 Remember your prelates who have spoken the word of God to you; whose faith follow, considering the end of their conversation,

8 Jesus Christ, yesterday, and today; and the same for ever.

3 If armies in camp should stand together against me, my heart shall not fear. If a battle should rise up against me, in this will I be confident.

8 My heart hath said to thee: My face hath sought thee: thy face, O Lord, will I still seek.

9 Turn not away thy face from me; decline not in thy wrath from thy servant. Be thou my helper, forsake me not; do not thou despise me, O God my Saviour.

14 And king Herod heard, (for his name was made manifest,) and he said: John the Baptist is risen again from the dead, and therefore mighty works shew forth themselves in him.

16 Which Herod hearing, said: John whom I beheaded, he is risen again from the dead.

17 For Herod himself had sent and apprehended John, and bound him in prison for the sake of Herodias the wife of Philip his brother, because he had married her.

18 For John said to Herod: It is not lawful for thee to have thy brother’s wife.

19 Now Herodias laid snares for him: and was desirous to put him to death, and could not.

20 For Herod feared John, knowing him to be a just and holy man: and kept him, and when he heard him, did many things: and he heard him willingly.

21 And when a convenient day was come, Herod made a supper for his birthday, for the princes, and tribunes, and chief men of Galilee.

22 And when the daughter of the same Herodias had come in, and had danced, and pleased Herod, and them that were at table with him, the king said to the damsel: Ask of me what thou wilt, and I will give it thee.

23 And he swore to her: Whatsoever thou shalt ask I will give thee, though it be the half of my kingdom.

24 Who when she was gone out, said to her mother, What shall I ask? But she said: The head of John the Baptist.

25 And when she was come in immediately with haste to the king, she asked, saying: I will that forthwith thou give me in a dish, the head of John the Baptist.

26 And the king was struck sad. Yet because of his oath, and because of them that were with him at table, he would not displease her:

27 But sending an executioner, he commanded that his head should be brought in a dish.

28 And he beheaded him in the prison, and brought his head in a dish: and gave it to the damsel, and the damsel gave it to her mother.

29 Which his disciples hearing came, and took his body, and laid it in a tomb.

The readings on this page are taken from the Douay-Rheims Catholic Bible. You can also read the Mass Readings taken from the New Jerusalem Bible, which is used at Mass in most of the English-speaking world. (References, Copyrights).
◄ February 2 February 4 ►
By Pradeep Augustine
Print
Facebook
WhatsApp
Twitter
Pinterest
Linkedin
Email
Telegram
LINE
Viber