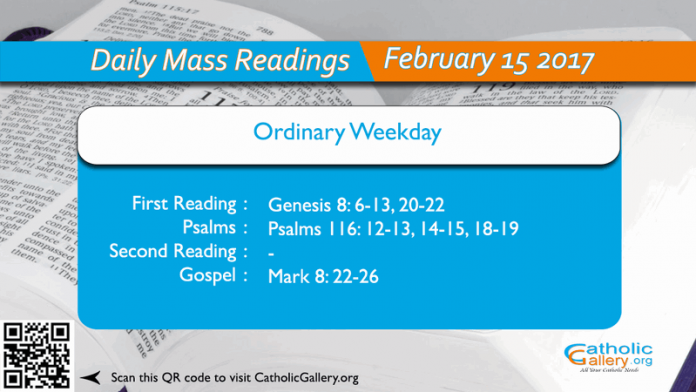 6 And after that forty days were passed, Noe, opening the window of the ark which he had made, sent forth a raven:

7 Which went forth and did not return, till the waters were dried up upon the earth.

8 He sent forth also a dove after him, to see if the waters had now ceased upon the face of the earth.

9 But she, not finding where her foot might rest, returned to him into the ark: for the waters were upon the whole earth: and he put forth his hand, and caught her, and brought her into the ark.

10 And having waited yet seven other days, he again sent forth the dove out of the ark.

11 And she came to him in the evening, carrying a bough of an olive tree, with green leaves, in her mouth. Noe therefore understood that the waters were ceased upon the earth.

12 And he stayed yet other seven days: and he sent forth the dove, which returned not any more unto him.

13 Therefore in the six hundredth and first year, the first month, the first day of the month, the waters were lessened upon the earth, and Noe opening the covering of the ark, looked, and saw that the face of the earth was dried.

20 And Noe built an altar unto the Lord: and taking of all cattle and fowls that were clean, offered holocausts upon the altar.

21 And the Lord smelled a sweet savour, and said: I will no more curse the earth for the sake of man: for the imagination and thought of man’s heart are prone to evil from his youth: therefore I will no more destroy every living soul as I have done.

22 All the days of the earth, seedtime and harvest, cold and heat, summer and winter, night and day, shall not cease.

12 What shall I render to the Lord, for all the things he hath rendered unto me?

13 I will take the chalice of salvation; and I will call upon the name of the Lord.

14 I will pay my vows to the Lord before all his people:

15 Precious in the sight of the Lord is the death of his saints.

18 I will pay my vows to the Lord in the sight of all his people:

19 In the courts of the house of the Lord, in the midst of thee, O Jerusalem.

22 And they came to Bethsaida; and they bring to him a blind man, and they besought him that he would touch him.

23 And taking the blind man by the hand, he led him out of the town; and spitting upon his eyes, laying his hands on him, he asked him if he saw any thing.

24 And looking up, he said: I see men as it were trees, walking.

25 After that again he laid his hands upon his eyes, and he began to see, and was restored, so that he saw all things clearly.

26 And he sent him into his house, saying: Go into thy house, and if thou enter into the town, tell nobody.

The readings on this page are taken from the Douay-Rheims Catholic Bible. You can also read the Mass Readings taken from the New Jerusalem Bible, which is used at Mass in most of the English-speaking world. (References, Copyrights).
◄ February 14 February 16 ►
By Pradeep Augustine
Print
Facebook
WhatsApp
Twitter
Pinterest
Linkedin
Email
Telegram
LINE
Viber