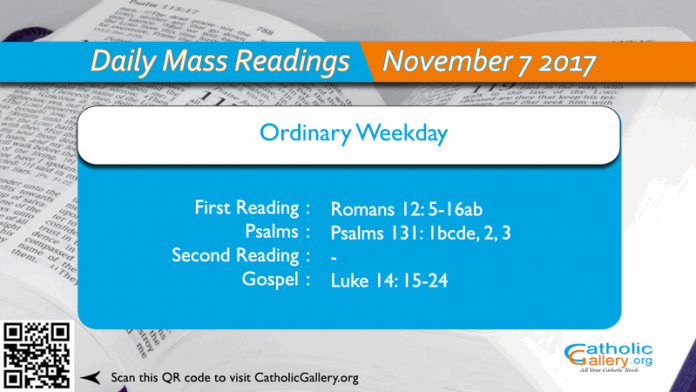 5 So we being many, are one body in Christ, and every one members one of another.

7 Or ministry, in ministering; or he that teacheth, in doctrine;

8 He that exhorteth, in exhorting; he that giveth, with simplicity; he that ruleth, with carefulness; he that sheweth mercy, with cheerfulness.

11 In carefulness not slothful. In spirit fervent. Serving the Lord.

12 Rejoicing in hope. Patient in tribulation. Instant in prayer.

13 Communicating to the necessities of the saints. Pursuing hospitality.

14 Bless them that persecute you: bless, and curse not.

16 Being of one mind one towards another. Not minding high things, but consenting to the humble.

1 Lord, my heart is not exalted: nor are my eyes lofty. Neither have I walked in great matters, nor in wonderful things above me.

2 If I was not humbly minded, but exalted my soul: As a child that is weaned is towards his mother, so reward in my soul.

3 Let Israel hope in the Lord, from henceforth now and for ever.

15 When one of them that sat at table with him, had heard these things, he said to him: Blessed is he that shall eat bread in the kingdom of God.

16 But he said to him: A certain man made a great supper, and invited many.

17 And he sent his servant at the hour of supper to say to them that were invited, that they should come, for now all things are ready.

18 And they began all at once to make excuse. The first said to him: I have bought a farm, and I must needs go out and see it: I pray thee, hold me excused.

19 And another said: I have bought five yoke of oxen, and I go to try them: I pray thee, hold me excused.

20 And another said: I have married a wife, and therefore I cannot come.

21 And the servant returning, told these things to his lord. Then the master of the house, being angry, said to his servant: Go out quickly into the streets and lanes of the city, and bring in hither the poor, and the feeble, and the blind, and the lame.

22 And the servant said: Lord, it is done as thou hast commanded, and yet there is room.

23 And the Lord said to the servant: Go out into the highways and hedges, and compel them to come in, that my house may be filled.

24 But I say unto you, that none of those men that were invited, shall taste of my supper.

The readings on this page are taken from the Douay-Rheims Catholic Bible. You can also read the Mass Readings taken from the New Jerusalem Bible, which is used at Mass in most of the English-speaking world. (References, Copyrights).
◄ November 6 November 8 ►
By Pradeep Augustine
Print
Facebook
WhatsApp
Twitter
Pinterest
Linkedin
Email
Telegram
LINE
Viber