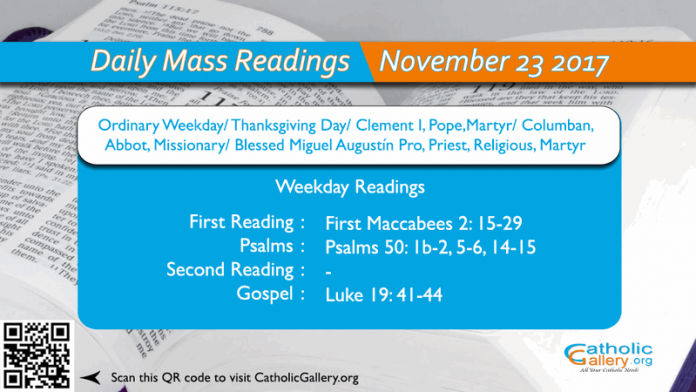 15 And they that were sent from king Antiochus came thither, to compel them that were fled into the city of Modin, to sacrifice, and to burn incense, and to depart from the law of God.

16 And many of the people of Israel consented, and came to them: but Mathathias and his sons stood firm.

17 And they that were sent from Antiochus, answering, said to Mathathias: Thou art a ruler, and an honourable, and great man in this city, and adorned with sons, and brethren.

18 Therefore come thou first, and obey the king’s commandment, as all nations have done, and the men of Juda, and they that remain in Jerusalem: and thou, and thy sons, shall be in the number of the king’s friends, and enriched with gold, and silver, and many presents.

19 Then Mathathias answered, and said with a loud voice: Although all nations obey king Antiochus, so as to depart every man from the service of the law of his fathers, and consent to his commandments:

20 I and my sons, and my brethren will obey the law of our fathers.

21 God be merciful unto us: it is not profitable for us to forsake the law, and the justices of God:

22 We will not hearken to the words of king Antiochus, neither will we sacrifice, and transgress the commandments of our law, to go another way.

23 Now as he left off speaking these words, there came a certain Jew in the sight of all to sacrifice to the idols upon the altar in the city of Modin, according to the king’s commandment.

24 And Mathathias saw and was grieved, and his reins trembled, and his wrath was kindled according to the judgment of the law, and running upon him he slew him upon the altar:

25 Moreover the man whom king Antiochus had sent, who compelled them to sacrifice, he slew at the same time, and pulled down the altar.

26 And shewed zeal for the law, as Phinees did by Zamri the son of Salomi.

27 And Mathathias cried out in the city with a loud voice, saying: Every one that hath zeal for the law, and maintaineth the testament, let him follow me.

28 So he, and his sons fled into the mountains, and left all that they had in the city.

29 Then many that sought after judgment, and justice, went down into the desert:

1 The God of gods, the Lord hath spoken: and he hath called the earth. From the rising of the sun, to the going down thereof:

2 Out of Sion the loveliness of his beauty.

5 Gather ye together his saints to him: who set his covenant before sacrifices.

6 And the heavens shall declare his justice: for God is judge.

14 Offer to God the sacrifice of praise: and pay thy vows to the most High.

15 And call upon me in the day of trouble: I will deliver thee, and thou shalt glorify me.

41 And when he drew near, seeing the city, he wept over it, saying:

42 If thou also hadst known, and that in this thy day, the things that are to thy peace; but now they are hidden from thy eyes.

43 For the days shall come upon thee, and thy enemies shall cast a trench about thee, and compass thee round, and straiten thee on every side,

44 And beat thee flat to the ground, and thy children who are in thee: and they shall not leave in thee a stone upon a stone: because thou hast not known the time of thy visitation.

The readings on this page are taken from the Douay-Rheims Catholic Bible. You can also read the Mass Readings taken from the New Jerusalem Bible, which is used at Mass in most of the English-speaking world. (References, Copyrights).
◄ November 22 November 24 ►
By Pradeep Augustine
Print
Facebook
WhatsApp
Twitter
Pinterest
Linkedin
Email
Telegram
LINE
Viber